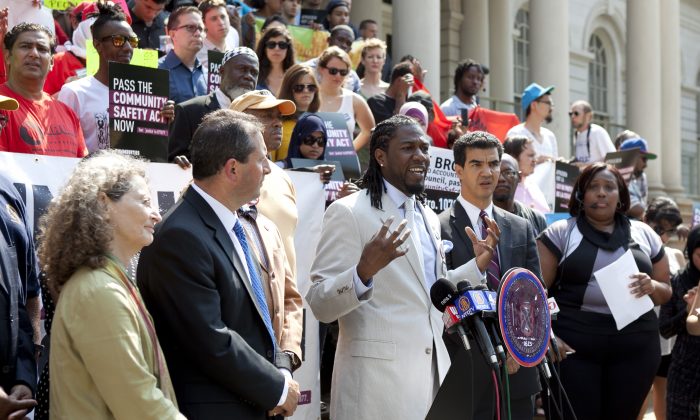 NEW YORK—While much of New York lay fast asleep, the 51 members of the New York City Council burned the midnight oil voting on legislation that is expected to bring sweeping changes to the policing tactic of stop, question, and frisk.

The Council voted on two bills—Intro 1079, which would create an office of the Inspector General (IG) to oversee the NYPD; and Intro 1080, which would prohibit bias-based profiling and allow New Yorkers to sue if they feel the law has been violated.

“I did not expect this to be so powerful,” said Council member Brad Lander, who has been an outspoken supporter of the bill.

Lead sponsor Jumaane Williams gave a moving opening speech about the bills he has fought for since their introduction in October 2012. “If you have never been any of the people who we are trying to help and who are dealing with issues every single day, please listen to us,” Williams said.

He said Mayor Michael Bloomberg, Police Commissioner Ray Kelly, and precinct commanders, who have all been critics of the bills, called members of the council before the vote to dissuade them from passing the legislation. In numerous press conferences this week, Bloomberg and Kelly have stated that voting for the bills would bring crime rates up and also jeopardize the financial stability of the city due to lawsuits.

“I believe we are all intelligent enough here to understand what is going on in our districts and understand we can have safety and police accountability at the same time,” Williams said.

The bills have been a point of contention in the Council. For the first time in its history, the Council voted to discharge the bills from the Public Safety Committee without a vote. Committee chairman Peter Vallone Jr. refused to bring it to a vote, saying it would bankrupt the city. Despite Vallone’s objections, the Council went around him, allowing the bill to be heard before the entire council.

All 51 members of the Council were given two minutes to give a speech on their position before a vote. The debate was thoughtful, lively, and at times revealing.

Several members of the Council gave personal stories of their encounters with police, of being stopped and frisked. Donovan Richards told a poignant story of being stopped at age 13. “It shook me up. It dehumanized me,” Richards said.

After Council member Peter Koo argued education might be a fix, not the legislation, Council member Helen Foster said she has a high school diploma, a college degree, and a law degree, yet she has been stopped.

Not everyone spoke passionately in favor of the bills. Council member Eric Ulrich called the IG bill a waste of money and suggested using the funds to put more police on the streets.

After 2 a.m., Ruben Willis cast the 34th vote on the biased-based profiling bill, giving the Council a veto-proof majority. Following his comments, the Council Chambers erupted into cheers.

The mayor issued a statement after the hearing vowing to veto the bill, and will have 30 days in which to file his veto. The bills need 34 votes to override the mayor’s veto, meaning if no one changes their vote, the bills should pass. If one Council member takes a vacation or is sick on the day of the vote, the veto would stick.