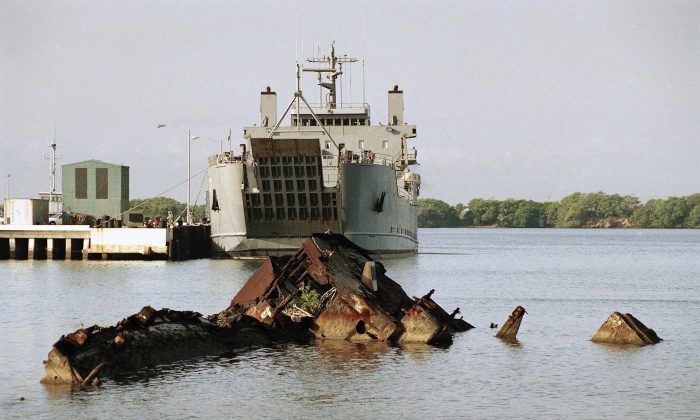 Entombed at Pearl Harbor, the remains of the USS Utah are seen in the foreground, with its eroded hulk lying in waters on the northwestern side of Ford Island, Hawaii on Nov. 22, 1991. (AP Photo/Eric Risberg)
US

When the electricity rate increased from 27 cents to 62 cents per kilowatt-hour, the executive director of the Pacific Aviation Museum Pearl Harbor knew it was time to seriously consider a clean energy alternative. The museum flipped the switch on 1,400 newly installed PV solar panels on Saturday.

“As a nonprofit, we are always looking for ways to minimize our operational expenses without impacting our visitor experience,” said Kenneth DeHoff, the executive director of the museum in a press release.

He said the new solar panels would save the famous Hawaiian museum about $300,000 per year in electricity costs, which can be applied to education programs. The 501(c)(3), which prides itself in preserving Pacific aviation history, reaches hundreds of thousands of visitors annually plus their education programs service 10,000 young people a year.

As one of the first states at the forefront of the solar panel revolution, Hawaii is no stranger to solar-generated electricity.

In 2014, Hawaii had the highest electricity prices in the nation, according to the Energy Information Administration (EIA). In efforts to tackle the high cost of electricity, the Aloha State added 9,200 net-metered solar PV systems in the first 10 months of 2014, bringing the total number of customers to about 48,000, according to a January EIA report. Its utility scale solar electricity generation more than doubled that year. On Oahu, Hawaii’s most populated island, approximately 12 percent of electricity customers had rooftop solar panels.

Hawaii became known as the first state to set a goal of producing 100 percent of its electricity from renewable energy sources by 2045, but the spurt of installations did not come without some stress on the grid.

The onslaught of solar-generated electricity flowing into a power grid designed to move electricity in the other direction caused unanticipated voltage fluctuations. Solar PV capacity on the Hawaiian Electric distribution grids exceeded the circuit’s daytime minimum load by 120 percent or more, which if left unchecked could have led to brownouts or blackouts.

Although the electric company had approved thousands of applications by January, the approval process had to be slowed down to avoid circuit overload. Customers caught in the backlog of applications were frustrated, knowing that some of their closest neighbors were enjoying significant savings on their electricity bills while they weren’t.

But the famous museum located on Ford Island, and considered by many to be “ground zero” for the Dec. 7, 1941 Pearl Harbor attack, spent two years planning, installing, and testing before embarking on this historical milestone.