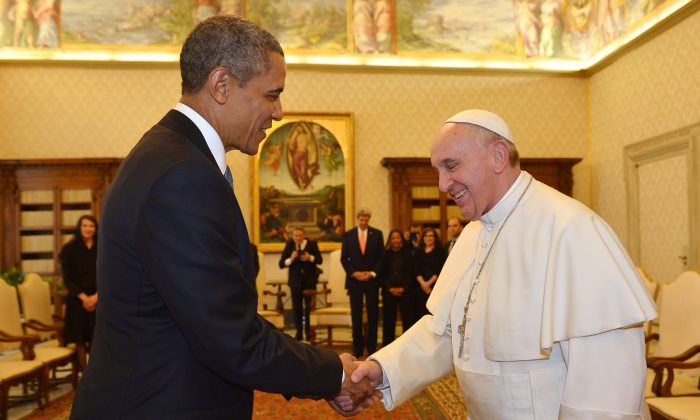 Pope Francis and President Barack Obama shake hands at the Vatican Thursday, March 27, 2014. President Barack Obama called himself a "great admirer" of Pope Francis as he sat down at the Vatican Thursday with the pontiff he considers a kindred spirit on issues of economic inequality. Their historic first meeting comes as Obama's administration and the church remain deeply split on issues of abortion and contraception. (AP Photo/Gabriel Bouys, Pool)
Tech

An article claiming that President Barack Obama met with Pope Francis and signed an Islam-Christianity “pact,” suggesting that Obama is a Muslim, is fake and from a satire news site.

The article was published on the National Report, which doesn’t post and real news. It has thousands of shares on Facebook.

“Signaling the end to centuries of hostilities, Pope Francis and United States President, Barack Hussein Obama today, signed a historic agreement in which each formally committed to future cooperation in bringing the two ‘great religions’ together, marking the beginning of what each side hopes will usher in a new era of working together to bring about world peace,” the article reads.

The National Report has a disclaimer on its website.

“National Report is a news and political satire web publication, which may or may not use real names, often in semi-real or mostly fictitious ways. All news articles contained within National Report are fiction, and presumably fake news. Any resemblance to the truth is purely coincidental,” the disclaimer reads.

Obama actually did met Pope Francis at the Vatican on Thursday, talking for about 50 minutes.

Obama presented the pope a custom-made chest with a variety of fruit and vegetable seeds from the White House Garden.

“These, I think, are carrots,” Obama said, according to ABC. “Each one has a different seed in it. The box is made from timber from the first cathedral to open in the United States, in Baltimore.”

“If you have a chance to come to the White House, we can show you our garden as well,” the president said.