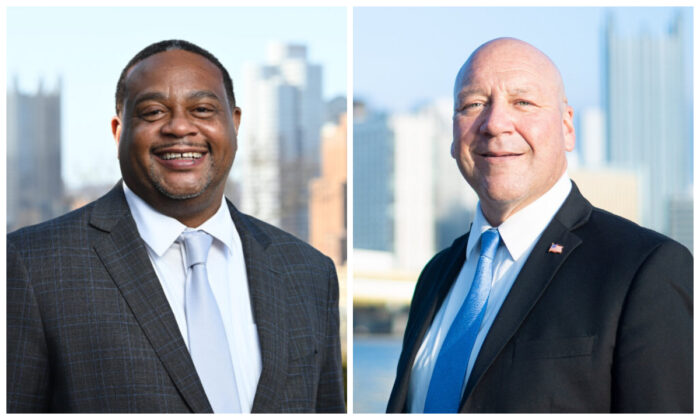 PITTSBURGH—Pittsburgh’s mayoral election this week will have a historic outcome no matter who wins.

State Rep. Edward Gainey is the favorite to become the city’s first African American mayor in this traditionally Democratic city. However, a victory by his rival, Tony Moreno, would give the city its first Mexican/Native American mayor, as well as the first Republican in City Hall in generations; he’s running as a Republican after he failed to win the primary as a Democrat.

Gainey argues for the “demilitarization” of the police and more engagement by officers walking a beat in the community, while Moreno, a military veteran and a former city police officer, says crime is spiking.

Moreno has pledged not to defund the police.

“I will keep the city safe,” he told The Epoch Times, adding that he advocates smart police policies.

He has a formidable task in this Democratic Party bastion. If elected, he would be the city’s first Republican mayor since 1933 and its first elected GOP mayor since 1929.

In the spring, when Gainey defeated Mayor Bill Peduto in the Democratic primary, a KDKA television commentator said Gainey was “all but elected.”

Much of the general election campaign has focused on public safety; policing and potential reforms figured prominently in debates. While there’s agreement between the candidates that crime is becoming a serious problem, last year’s numbers indicate the opposite.

“Violent crimes and property crimes fell by 20 percent from the previous year,” the Pittsburgh Bureau of Police reported.

However, Moreno says the reality is different.

“Crime is not actually down,” Moreno said. “It’s the way the city has redesignated the categories of crimes.”

Gainey, in a KDKA television debate with Moreno, warned that violence is escalating.

“There’s a reason why 14-, 15-, and 16-year-olds are waking up with violence on their minds,” he said, promising to “establish alternative response procedures for nonviolent and mental health emergency calls that will reduce police interactions for those struggling with substance abuse disorders, homelessness, mental health crises, and trauma, getting them the resources they need rather than sending them to jail.”

“The best way to improve community relations is when you have officers walking a beat and when there is a presence,” Gainey said, adding that more police is often not the solution to crime problems, and that policing should incorporate a public health plan.

Moreno says Gainey’s police proposals are flawed, and criticized the policies of the current mayor, Peduto, a Democrat who is now finishing his second term.

“The difference between the way [Gainey] talks about foot patrol and the way I do,” Moreno said, “is that the current administration does not believe in engaging with people committing crimes related to homelessness, addiction, and mental illness.”

Moreno said sometimes a person must be made to go to a mental health center for evaluation.

“The court system must be utilized to force the individual into treatment for their safety and the safety of the public,” he said. “That is when the Sequential Intercept Model comes into play. This is where diversion from incarceration and direction into treatment and other services takes place.”

Moreno dismissed Gainey’s idea of beat cops, saying officers walking through neighborhoods with no authority to stop criminal activity “are not going to accomplish much.”

But Gainey contends that police officers today often lack personal relationships with their communities. He said if the only time a resident “sees an officer is when there’s a problem, then that erodes the relationship.”

Gainey is a veteran of Pittsburgh politics, which Moreno criticizes. Moreno has called out the local Democratic political establishment and accused the “corrupt” media establishment of taking radical left positions such as defunding or reimagining the police. He said Gainey is surrounding himself with socialists.

Gainey, who declined requests for comment from The Epoch Times, dismisses charges of political extremism. He said he’s happy to receive support both from those on the left and the right. By contrast, he said Moreno often condemns “both Republicans and Democrats.”

Gainey has an extensive political resume. He has served on the staff of two mayors, has been a community development specialist, and started programs such as the “52 Weeks of Peace” and the “Minority Business Seminar.”

Gainey also worked with the Pittsburgh Police Department “to improve their hiring practices,” according to his website. He warns that the city must find a way to deescalate violence and advocates for “equitable policing throughout Pittsburgh.”

Would he fire the police chief?

Gainey, during the KDKA debate, said he wouldn’t make that call during the campaign.

“We have seen a lot of failures in this administration,” Moreno said. “We have to address them and hold everybody accountable.” While Moreno said the entire police staff would be reviewed, he said that Gainey supported the City Council’s decision to cut $11 million from police training.

“Number one, I had nothing to do with that council decision. And number two, I never said that I would defund the police.”

On the night of a debate hosted by Casa San Jose, a multiple shooting occurred in the Hill district; both candidates stopped to pray for the victims.

Later in the campaign, there was the police use of a Taser of Jim Rogers, a black man who was suspected of stealing a bicycle in the Bloomfield neighborhood. Rogers died at a hospital on Oct. 14, a day after his arrest.

The Rogers case became a part of the most important debate of this campaign, a debate taking place in many big U.S. cities: How do police interact with the public? And how do they keep the city secure at the same time?

At a memorial for Rogers, some accused the police, the media, and politicians of being “enemies of the people.”

Moreno and Gainey both called the death “a tragedy.” However, they came to different conclusions.

Gainey said the police department must reconnect with the community. A lifetime Pittsburgh resident, he said he remembers the beat cops of his youth and wants them brought back.

However, Moreno, who knew Rogers, contended that this problem is deeper.

“This city government doesn’t follow its own police policies. This was a worst-case scenario outcome but unfortunately, it was an inevitable one,” Moreno said.

“The death of Jim Rogers is sad and tragic and incredibly preventable. There are policies in this department that are not being enforced that could have helped this situation, and Jim would still be with us.”

Gainey said the police will improve with more community control.

In a campaign statement, Gainey said he “will work with Council to strengthen the Citizen Police Review Board’s (CPRB) ability to compel testimony from officers and conduct thorough, independent investigations of allegations of police misconduct.”

Moreno said more community board control of the police won’t work, instead blaming the current administration for allowing officers to patrol alone, while noting many other big cities have two-person police cars as a standard.

Moreno said the Rogers tragedy is likely an example in which two-person cars, which he said are achievable with better fiscal management, would have better served the community.

Moreno has contended the city government misallocates police resources, forcing officers to do trivial chores such as delivering food.

Moreno’s political path has been unusual. He came out of retirement after 24 years as a local street cop and was a career Democrat who supported President Barack Obama. But he has also praised President Donald Trump for his policies to help veterans, while criticizing him on immigrant issues.

Moreno, along with Peduto, lost to Gainey in this spring’s Democratic mayoral primary. Moreno said that in some districts he “got zero votes, and I know that’s not true because some people there told me they voted for me.”

Nevertheless, Moreno received 2,400 write-in votes in the GOP primary, 1,000 of which were thrown out owing to misspellings, but he met the threshold needed to obtain the GOP nomination.

Moreno said the windows of his South Main Street campaign headquarters in the West End were recently smashed and anti-police slogans were spray-painted on his property. He accused local news media of largely ignoring the attack, saying the Pittsburgh Post-Gazette and KDKA television effectively blacked out the incident.

Neither outlet responded to requests by The Epoch Times for comment.

“I’m also a minority candidate. I’m being attacked, violently,” Moreno said, adding that he believes the media response would have been different had the vandalism occurred at Gainey’s headquarters.