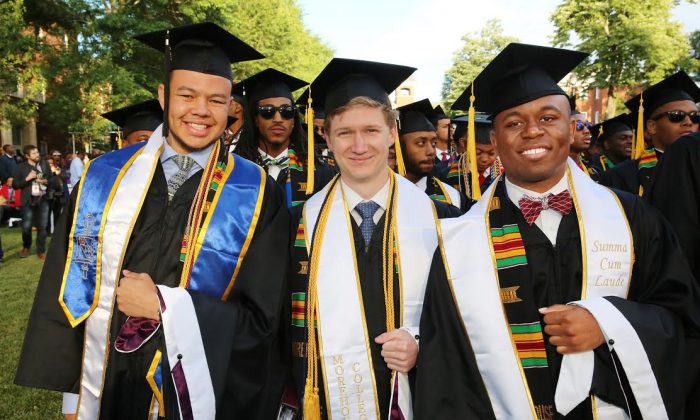 Liam, Ian and Willie (Morehouse College strategic of communications )
US

What It Takes to Be Valedictorian: Three College Students Share Their Secrets

Here’s something you don’t see often: three valedictorians at one college.

Morehouse College held its 132nd commencement in Atlanta on May 15, with a total of 379 graduates, as well as a historic first: three valedictorians.

Many media have since focused on one of the students being white—in the traditionally black school—and overshadowing the impressive academic achievements of all three valedictorians: a perfect 4.0 grade point average (GPA).

Epoch Times spoke with the three young men and delved into the making of a valedictorian. Here are their stories:

He brought his entrepreneurial skills to Morehouse, where he was surrounded by upperclassmen with 4.0 GPAs. These examples motivated him to do the same. By his spring semester in 2014, during his junior year, he realized that achieving that GPA was possible. “I wanted to maintain it for my parents and family—make my parents proud,” he said.

As an undergraduate at Morehouse, Davis was involved in at least eight extracurricular initiatives, most of which he led, displaying his leadership skills. When he wasn’t in class or at the library burying his head in books, he was interning at places like J.P. Morgan Investment Banking, Huntington Industrial Partners, Deloitte Consulting LLP, and others.

Davis, whose motto in life is “don’t sweat the small stuff,” will be pursuing an MSA at Wake Forest University this fall. But he wants Morehouse undergraduates to take their time “to appreciate the journey.”

Davis studied Monday through Thursday every night—a total of 30 hours every week—and often got lost in his studies.

He admitted that in doing so, he “became a machine.” Still, Davis couldn’t be prouder of his accomplishments and is looking forward to going back to his studies in the next couple of months.

Willie J. Thompson, 22, grew up in Griffin, Georgia, and obtained a degree in economics with a minor in Chinese studies. He plans to work for The Bridgespan Group (TBG) in Boston, as well as go to Taiwan as a Fulbright Scholar.

When Thompson arrived at Morehouse, he had something to prove.

“I graduated third in my class in high school, but I had a number of classmates, and even a teacher, who believed that I did not deserve that spot,” he said.

“I went about securing my 4.0 through a lot of prayer and planning. I organized my days so that I knew what I wanted to study for [that] day,” he said, adding that as he became more accustomed to planning his studies, sticky notes became his best friend.

“If something did not make sense after class, I would not give up. I would visit office hours to clarify a subject or a concept,” he added.

After the spring of Thompson’s sophomore year, he had a 4.0 GPA, so he decided to “shoot for graduating at the top of my class,” he said. “It feels great knowing I have made this accomplishment.”

Although he is very proud of himself, Thompson explained that he did not do it on his own.

There have been countless individuals who poured themselves into his success, he said. “All deserve credit for helping me get this far. If anything, this journey has shown me how having an effective support structure is vital to any person’s success.”

When asked what advice he has to Morehouse undergraduates, he said, “Be compassionate.”

“The world is full of enough pompous and arrogant people, who think they are self-made and are unwilling to help their brothers. Do not let Morehouse become one such place,” he said.

Thompson, who believes that “the pursuit of one’s passion is vital for one’s happiness,” said that in five years he sees himself as either a senior associate consultant at TBG preparing for a promotion, or a student in graduate school pursuing a joint MBA-MA in education.

Thompson shared what he has learned throughout his college years: “When one pursues their passion, they are sure to suffer in some way by sacrificing something.”

He then used economics as an example: “Economics teaches us that there is always a trade-off. For me, the trade-off was salary. I took about a $30,000 pay cut by deciding to work at TBG instead of some other consulting firms, but the benefit I get from pursuing my passion and work that is important to me exceeds that $30,000 tremendously.”

Ian Niemeyer, 22, from Durham, North Carolina, graduated from Morehouse in three-and-a-half years with a degree in economics.

“I really came to Morehouse with no expectations. I felt like coming into the school was like having a blank slate, and I just focused on doing my best. My focus was to take it a semester at a time and just make sure I prioritized my schoolwork and managed my time effectively,” Niemeyer told Epoch Times.

In order to graduate early, Niemeyer said he had to make a lot of sacrifices.

“There are activities I cut out which made it so I didn’t have to choose one or the other as much. I played a lot of video games in high school and completely cut them out when I came to college. Same with television, although I am still a sucker for ‘Game of Thrones.’ It is surprising how much time those activities take out of your day,” he said.

According to Niemeyer, it is imperative to “fully engage with the resources that the school provides” and also build “relationships with your fellow brothers, as those are the ones which will last a lifetime,” he said.

One would think that graduating early means there’s no room for fun. However, Niemeyer says that he worked to plan times where he could “completely disconnect and recover.”

“A group of my friends and I have planned various trips where we could just get out of the city and relax for a while—we’ve gone skydiving, whitewater rafting, skiing, and backpacking,” he said.

Niemeyer currently works as an investment analyst for Prudential Capital Group. His ultimate plan is to start his own investment firm “to get the skill set to have my own or have a stake in building a firm one day.”

He is also considering an MBA.

When asked who he looks up to, Niemeyer said Benjamin Franklin—because he was the “quintessential American.”

“He placed a high value on independent thought, was a dedicated lifelong learner, and had an appetite for curiosity—all qualities I wish to emulate,” he said.

But in the end, all that matters in life, Niemeyer said, is focusing on things you can control.

“I think we spend too much time and energy on things that happen to us which we couldn’t have changed in the first place. Our strength comes in our control: in how we react to the past, the action we take in the present, and how we prepare for the future,” he said.

“It is through this mindset that we are able to embrace uncertainty—which, as an investor, is almost a prerequisite for a successful career, which is why it’s a mindset I’m committed to cultivating.”