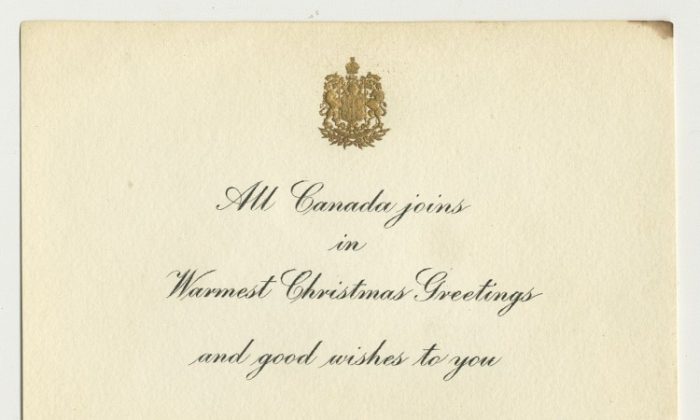 The Christmas card sent in 1943 by Prime Minister Mackenzie King to Rifleman Kenneth Pifher of Paris, Ont., when he was a prisoner of war in a Japanese prison camp. Pifher, now 91, gave the card to Prime Minister Stephen Harper at a Remembrance Day ceremony in Hong Kong on Nov. 11, 2012. It was then donated to the War Museum. (Canadian War Museum, Photo by Bill Kent)
US

In 1943, while a prisoner of war in a Japanese prison camp after being captured at the battle of Hong Kong, Arthur Kenneth Pifher received a Christmas card he would treasure for many years.

The card bore greetings from Prime Minister William Lyon Mackenzie King who, during the Second World War, sent Christmas wishes to prisoners of war on behalf of all Canadians.

Rifleman Pifher was one of the few Hong Kong prisoners to actually receive one of King’s cards. He hung on to it for 69 years before presenting it as a memento to Prime Minister Stephen Harper at a Remembrance Day ceremony in Hong Kong on Nov. 11 this year.

The card was then donated to the War Museum, which is putting it on display for the holiday season as a “poignant reminder of the service and sacrifice of Canada’s veterans and a symbol of a nation’s gratitude and remembrance,” according to a museum press release.

The card bears King’s signature and reads, “All Canada joins in Warmest Christmas Greetings and good wishes to you.”

Pifher, from Paris, Ont., was just 19 years old when he enlisted in August 1940 and the following year was among the 1,975 Canadian troops sent to Hong Kong to defend the British colony.

A large Japanese force invaded on Dec. 8, 1941, and the colony fell after 17 days of intense fighting. Pifher was among those captured and sent to prison camps in Hong Kong and China.

By the end of the war, nearly 300 of his Canadian comrades had died in captivity from malnutrition, disease, overwork, and brutality.

“This simple Christmas greeting recalls a nation at war, a young soldier’s suffering far from home, and the forms of personal and national remembrance,” museum director general James Whitham said in the release.

“We are grateful that Mr. Ken Pifher preserved this important artifact for so many years and we are pleased to add it to our National Collection.”

Both the card and Pifher’s message to Harper when he gave him the card will be on display until Jan. 6, 2013.

The message reads, “Sixty-nine years ago, while a captive POW in Sham Shui Po prison camp, I received this card for Christmas. Please accept this as a memento of today’s Remembrance Ceremony.”