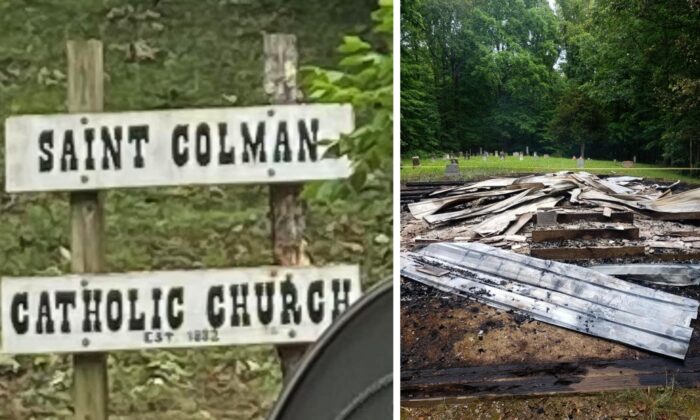 A major fire at St. Colman Catholic Church in West Virginia is being investigated as arson. (Courtesy of Beaver Volunteer Fire Department)
Crime and Incidents

A Catholic Church in Raleigh County, West Virginia, burned to the ground over the weekend and authorities are now investigating the incident as arson.

The Beaver Volunteer Fire Department said in a news release that units were notified on June 26 about a structural fire at the Saint Colman Catholic Church on Irish Mountain Road in Shady Spring.

“Upon arrival, we found the structure was already burned to the ground and smoldering,” officials said. “At this time the fire is considered suspicious in nature and is being investigated as arson.”

No further details about potential suspects or the cause of the blaze were released.

Saint Colman Catholic Church, which was built in 1878, has not held services since it was officially declared a historic site in 1984, FOX News reported. The building was also known as the “Little Catholic Church on Irish Mountain.”

The latest suspected arson attack happened as a string of Catholic Churches across the United States and Canada have faced a series of vandalism and arson attacks in recent years.

At least 142 incidents involving the targeting of Catholic sites have occurred across 36 states and Washington D.C. since May 2020, according to the U.S. Conference of Catholic Bishops.

According to the organization, the incidents include arson, destroying and defacing of statues, and defacing of gravestones along with burned American flags left next to them, among other forms of destruction and vandalism.

The fire also comes as Catholic Churches and pregnancy help centers in California were warned of possible violent attacks in the wake of the Supreme Court’s overturning of Roe v. Wade.

The Diocese of Stockton sent an urgent memo on June 23 to warn its clergymen, parish, and pastoral staff that Jesse Rangel—an agent of the U.S. Department of Homeland Security—told them “a manifesto has been found by federal law enforcement officials, of an extremist group calling for a ‘Night of Rage’ beginning at 8 p.m.” on the day of the ruling.

According to the memo, which was posted on Twitter, Rangel said that the unnamed group is “calling for extreme violence” against Catholic churches and pregnancy centers, and that large groups with cells nationwide have been found already “casing” parishes, including some in California.

The head of communications for the Diocese of Orange, Jarryd Gonzales, told The Epoch Times they didn’t receive any direct threat, but they were warned by another diocese about this.

He said local parishes and centers are heightening safety and security awareness following the threats.

Despite claims made by some pro-abortion activists, the overturning of Roe v. Wade does not itself end legal abortion across the country, but rather returns the matter to the states to enact their own abortion policies.