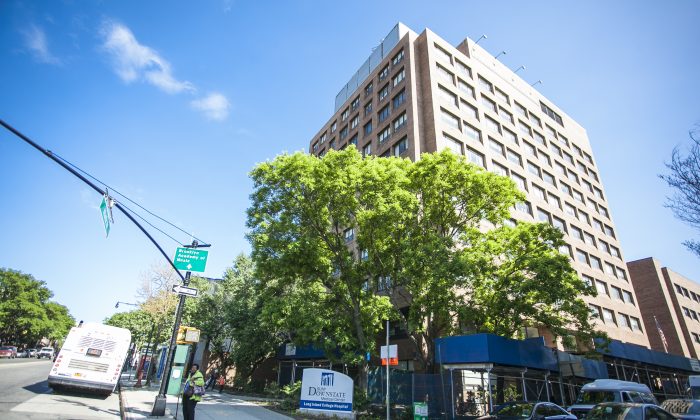 The exterior of Long Island College Hospital in Cobble Hill, Brooklyn, on May 29. It has closed most of its facilities and is currently only accepting emergency patients. (Samira Bouaou/Epoch Times)
New York

After the latest bid to save Brooklyn’s Long Island College Hospital failed this week, what remains is hope against all odds
By Amelia Pang

The doctors told her brother, “not on my watch.”

And when her brother could no longer be there, the nurses told him they would hold Raboy’s hand so she would not be alone.

“This whole process has been a very emotional roller coaster,” Raboy said of the sharp turns and sudden drops in the process to sell and close the hospital.

A week ago, State Supreme Court Justice Johnny Lee Baynes approved SUNY’s deal to sell the site to developer Peebles Corp., an outcome that would preserve hospital services after years of uncertainty about the financially troubled hospital’s future. Under the court agreement Long Island College Hospital (LICH) closed all health services except emergency care on May 22.

When the deal fell through less than a week later, community groups were not surprised. It was just another of the many roadblocks that have been ongoing for years.

SUNY is now in talks with Fortis Property Group, the third bidder in a round of recent proposals, and does not need to move onto the fourth in line if negotiations fall through yet again.

Raboy is a retired teacher and librarian turned community advocate who formed Patients for LICH after SUNY’s intentions to sell the site were made known last year.

SUNY had been accused of purchasing the site, located between the historic Brooklyn Heights district and Cobble Hill, for the sake of selling it, to the tune of about $1 billion. It wouldn’t have been a new idea, as the property is zoned for residential use.

SUNY did not respond to a request for comment.

The historic hospital—America’s first college teaching hospital—had been failing for years. Since 2008, it had closed department by department, and was sold piece by piece.

In 2013, SUNY put out a request for proposals (RFP) to sell the site to a developer. Patients of LICH were among the groups that had brought the university to court, calling for a more transparent RFP process, one that would rank the bids by the number of medical services each bidder would provide.

On Tuesday, in a letter to SUNY, Peebles wrote that due to tax issues it wanted to continue operating the emergency care under SUNY’s license until the deal closed, and stated it was in the state’s interest to do so. Peebles also requested access to the property to perform environmental testing.

“Instead, your client proposes that SUNY not exit but rather continue to provide care, bearing the cost of facility malpractice, for at least six months and possibly indefinitely based on your client’s request for extensions of the closing. This is unacceptable,” she wrote.

The property was supposed to be disposed as is, according to the request for proposals, and the cost-sharing Peebles was now proposing was “an attempt to impose a condition on the purchase price. This is also unacceptable.”

A Peebles representative told the Brooklyn Eagle all of the conditions in SUNY’s reply were negotiable and they had made several requests for a meeting but “SUNY has acted in bad faith and has not spoken or agreed to a meeting since Peebles signed a deal with the community.”

A former LICH employee said hospital staff thought the fact that no one from Peebles went to the hospital was a dead giveaway the negotiations would fail. “That’s when we knew something was going to go wrong. It’s like buying a house; wouldn’t you want to see it first?”

Brooklyn Health Partners, the bidder, which had ranked first, had also accused SUNY of negotiating in bad faith as its deal fell through.

Fortis had come in first in the first RFP round, and Raboy said she has hope SUNY and Fortis will come to an agreement now. When that time comes, the patients will support Fortis, and hold it accountable for every one of the medical services listed in its RFP proposal, she said.

“Today we begin what we have every confidence will be the final phase in resolving the long-standing issues at the LICH site,” SUNY Chairman Carl McCall stated Thursday.

“Make no mistake, SUNY is fighting for health care for the community and financial relief for our students, many of who are from Brooklyn. When it became clear that these priorities, as clearly stated in the RFP, were in jeopardy, we took the appropriate action.”

Many of Brooklyn’s hospitals have been failing as Manhattan’s hospitals expand into new sites. According to a state report released last year, about a quarter of Brooklyn residents’ health care spending goes to doctors and hospitals in Manhattan.

Meanwhile, Brooklyn’s hospitals have a vacancy rate close to 30 percent, and the state sees no reason to bail LICH out.

But to the nearby residents, LICH is indispensable.

At the hospital, Raboy remembered meeting a 95-year-old woman who was born in LICH, had her children in LICH, saw her grandchildren borne there, and her great-grandchildren.

“This is part of everybody’s family,” Raboy said. “It’s such a critical and crucial part of our community. It’s saved so many lives. It’s brought so many lives into the world.”

Tala Albert, a 31-year-old nanny with impeccable skin who lives in Crown Heights, used to go out of her way to have her pregnancy check-ups at LICH. The doctors would give her treats like apple juice and sweets, she said; meanwhile, at her neighborhood hospital—the Kings County Hospital Center—she’d have to bring her breakfast, lunch, and dinner for the long wait.

Some supporters of the hospital are holding onto hope. They’ve kept a list of 36 doctors—surgeons, pediatricians, and radiologists—who are willing to come back if the hospital were to reopen services.

“They saved me and I can’t save them,” Raboy said. “It’s very personal for me.”

But they are committed to working with Fortis, as they had been with Peebles, Raboy said. On Saturday, patients for LICH will rally at the hospital one last time to pay tribute to the staff.

Fortis responded on Thursday: “We are pleased that we have been given the opportunity to enter into negotiations with SUNY regarding the Long Island College Hospital project. Our team is ready, willing and able to ensure that there is a continuity of care that provides the people of Brooklyn with world-class healthcare.”