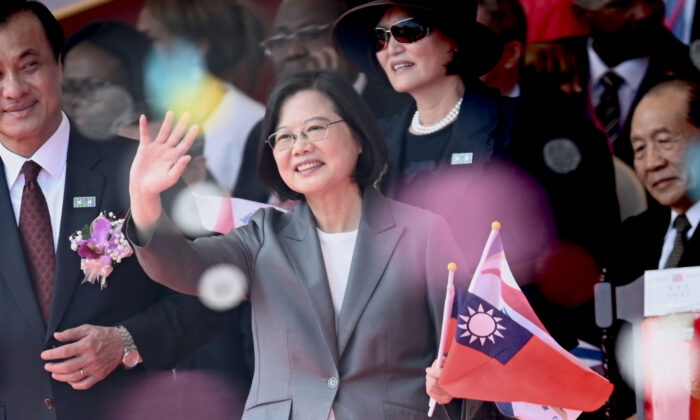 TAIPEI, Taiwan—The United States and Taiwan have agreed to a new trade initiative after the island was excluded from the new Indo-Pacific Economic Framework that President Joe Biden launched in May.

Calling the initiative “a historic breakthrough in Taiwan–U.S. economic and trade development,” Deng said it will pave the way for trade negotiations with the United States, potentially leading to a bilateral free trade agreement. He noted that the initiative will help Taiwan build economic ties with other governments in the world.

Deng said he’s scheduled to travel to Washington near the end of this month for a face-to-face meeting with U.S. trade officials under the initiative.

Joseph Wu, Taiwan’s foreign minister, said the initiative is of “high strategic” importance, saying that it will assist the island in joining the Comprehensive and Progressive Agreement for Trans-Pacific Partnership (CPTPP), an 11-nation free trade agreement.

Wu noted that Taiwan’s semiconductor and other high-tech industries make the island “a reliable partner” to the United States and other countries.

The initiative shows the U.S. commitment to the region, specifically economically, senior U.S. administration officials said on May 31 during a background call with the press.

“We will continue to build on this work to deepen our ties with Taiwan and the region in order to deliver for people at home and for people in the Indo-Pacific,” one official said. “The Biden-Harris administration sees Taiwan as a leading democracy, a technological powerhouse, and a key economic and security partner.”

At the meeting later this month, the two sides will talk about trade areas, including trade facilitation, regulatory practices, agriculture, anti-corruption, labor rights, and non-market practices and policies, according to the officials.

Biden announced the U.S.-led Indo-Pacific Economic Framework (IPEF) during his recent trip to Japan. The framework so far consists of 14 members, including the United States, Australia, India, Indonesia, Japan, South Korea, Malaysia, the Philippines, Thailand, Vietnam, and Fiji. Neither China nor Taiwan are in the framework.

The IPEF is widely seen as a U.S. strategy to counter China’s influence in the Asia-Pacific region. It’s also supposed to fill the regional void created when the United States pulled out of the Trans-Pacific Partnership (TPP), which later morphed into the CPTPP, in 2017.

Taiwan’s foreign ministry has expressed “regret” for not being included in the IPEF. Deng, at the June 1 press conference, said the Taiwanese government will continue to push for inclusion in the pact.

Some Republicans have expressed frustration at the Biden administration for not including Taiwan in the framework.

“Taiwan is a high-standards economy & one of our top trading partners,” Rep. Steve Chabot (R-Ohio) wrote on Twitter. “Leaving Taiwan out is a needless bow to the #CCP [Chinese Communist Party].”

Rep. Michelle Steel (R-Calif.) wrote on Twitter that she was disappointed in Biden for failing to include Taiwan “in a framework intended to counter the CCP’s hostility.”

“It’s beyond time for the President & the world to take Taiwan’s role on the world stage seriously,” Steel wrote.

Taiwan’s participation in the IPEF has support from politicians on both sides of the aisle. On May 18, before the framework was launched, a bipartisan group of more than 50 senators wrote a letter to Biden, urging the president to include Taiwan in the IPEF.

Senior administration officials, during the May 31 briefing, suggested that Taiwan could participate in the future.

“We do intend to pursue a flexible and adaptable approach to IPEF participation going forward,” one of the officials said.

The United States isn’t currently a formal diplomatic ally of Taiwan after Washington ended its diplomatic ties with Taipei in favor of Beijing in 1979. However, the two sides have enjoyed a robust relationship under the Taiwan Relations Act, which requires the United States to provide the island with military equipment for its self-defense.

Currently, Washington and Taipei also engage under a framework known as the Technology Trade and Investment Collaboration (TTIC), which was initiated in December following a virtual meeting between U.S. Commerce Secretary Gina Raimondo and Taiwan’s Economy Minister Wang Mei-hua.