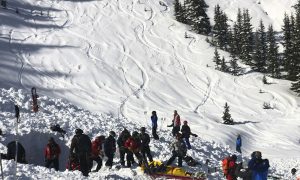 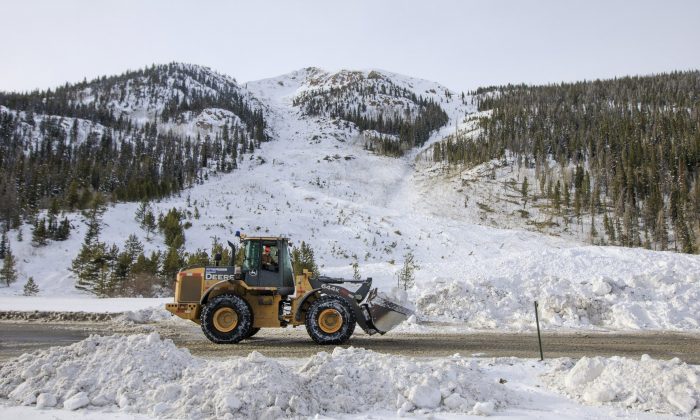 Crews work to remove the snow debris from a controlled avalanche that spilled onto Interstate 70 near Loveland Pass, Colo., on March 5, 2019. (Hugh Carey/Summit Daaily News via AP, File)
US News

DENVER—Historic avalanche danger caused havoc in the Colorado mountains March 7, shutting down portions of two highways and prompting a rare warning for drivers to avoid a route leading to some of the state’s busiest ski resorts.

After another round of heavy snow, at least three major snow slides buried vehicles and ruptured a natural gas line. No injuries were reported.

The first avalanche struck early Thursday near Vail Pass along Interstate 70, catching a tow truck at its outer edge.

The driver was not hurt but another tow truck had to pull his truck from the slide, which left 6 feet of snow on the road, transportation officials said.

A few hours later another avalanche ruptured a natural gas line to the east near Copper Mountain ski resort. Gas was turned off to the two buildings served by the line—a wastewater treatment plant and a gas station.

Crews had not been able to repair the break because of the ongoing avalanche danger, Xcel Energy spokeswoman Michelle Aguayo said.

Thursday afternoon, an avalanche thundered onto state Highway 91 about a mile south of Copper Mountain, engulfing at least three vehicles. The Colorado State Patrol said all the drivers and passengers were accounted for and safe.

Highway officials said the slide was 300 feet wide and up to 15 feet deep. It was in an area where no avalanche had hit before, officials said.

There was no word on how long it would take to reopen the highway.

Copper Mountain said on its website that electricity was out to some of the base villages, but it was not immediately known if that was related to one of the avalanches.

I-70 was closed for hours by the Vail Pass slide as well as later avalanches intentionally triggered by road crews to avoid more problems. The highway was re-opened Thursday night.

The Colorado Department of Transportation urged drivers to avoid traveling the highway in the mountains for much of Thursday.

The avalanche danger in the central mountains was rated as extreme, the highest rating.

The Colorado Avalanche Information Center said heavy March snows combined with strong winds created some of the most dangerous avalanche conditions in years.

An avalanche on Sunday stunned drivers along the interstate, sweeping vehicles off the road but causing no injuries.

All the new snow has proved to be too much of a good thing for some ski resorts.

One intentionally triggered avalanche near the town of Empire reached Interstate 70 for the first time since 1957.

Snow from another intentional avalanche near the Eisenhower Tunnel covered all four lanes of the highway and left snow and other debris up to 15 feet deep over a 300-foot stretch of the road, the center said.