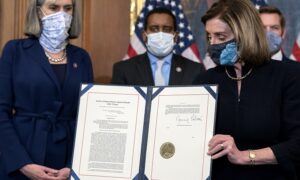 One of the poll questions also spelled out the current Republican proposal for an immigration reform, calling it “a Congressional deal that gives undocumented immigrants brought here by their parents work permits and a path to citizenship in exchange for increasing merit preference over preference for relatives, eliminating the diversity visa lottery, and funding barrier security on the U.S.-Mexico border.”

Trump welcomed Democrats to run with the idea, predicting it will cost them elections.

“That’s going to be their platform. Open borders, which equals crime. I think they’ll never win another election so I’m actually quite happy about it,” he said.

Americans strongly supported maintaining ICE, with 69 percent against disbanding, the poll showed. Hispanic voters, however, were split 50-50 on the issue.

The poll asked about 1,450 adults filtered for registered voters.
Watch Next: