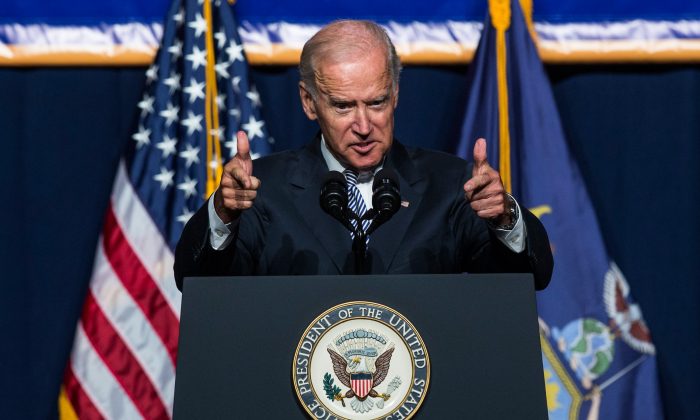 Vice President Joe Biden speaks in support of raising the minimum wage for the state of New York to $15 per hour in New York City on Sept. 10, 2015. Biden said he would like to see the federal minimum wage risen to $12 per hour. (Andrew Burton/Getty Images)
Politics

WASHINGTON—Awaiting a decision their boss has yet to make, Vice President Joe Biden’s circle of staff and longtime advisers have kicked into a higher gear of preparation for a presidential campaign that may never launch.

It’s an effort that includes feeling out potential campaign staffers and considering whether to set up an “exploratory committee” that could start raising money, and wondering when Biden will make a decision that will determine if those efforts will be for naught.

The timing of when Biden might make the call on whether to enter the Democratic race for president and take on front-runner Hillary Rodham Clinton remains unknown, even to the vice president himself. His self-set end-of-summer deadline has come and gone.

“It’s not quite there yet, and it may not get there in time to make it feasible to be able to run and succeed because there are certain windows that will close,” Biden told the Catholic magazine “America” last week, referring to filing deadlines and other obstacles. “But if that’s it, that’s it. But it’s not like I could rush it.”

Those who have discussed the race with Biden say he’s no more definitive in private than he is in such public comments. They add they are mystified by the flurry of recent claims from Biden’s overtly excited boosters and some news reports suggesting that he’s all but decided to run.

The idea of forming an exploratory committee is among a number of options that Biden’s advisers have put in front of him in recent weeks, according to half a dozen current and former Biden aides who are familiar with his deliberations. They spoke on condition of anonymity, because they weren’t authorized to speak publicly about the discussions.

Amid the uncertainty, the people said, two contradictory forces are at play: Nobody wants to pressure Biden to get in a race he’s not certain he can run while still grieving the death of his son. But nobody wants to deny Biden the option by failing to take the preliminary steps that simply can’t wait much longer.

In conversations with potential donors, his staff and informal advisers have avoided making firm asks of support, wary of getting ahead of the vice president before he’s made up his mind. But they’re keeping internal lists of major Democratic donors and political operatives they’ve spoken to, individuals familiar with the discussion said.

The subtler approach from Biden’s official staff and close advisers contrasts with that of Draft Biden, the super PAC urging him to run, which is seeking pledges from Democrats as a way to demonstrate to Biden and others that the needed ingredients for a successful campaign exist.

“The more that come out and are willing to make that public commitment and speak about why they’re supporting Joe Biden, it makes it safe for others to join or in some cases switch” from Clinton, said Jon Cooper, a major bundler for the Obama–Biden campaign and now Draft Biden’s finance chairman.

As Biden’s aides game out what a campaign would look like, they have started discussing names of potential staffers who could add recent experience in successful presidential races, several individuals said.

The waiting game has made for a period of uncertainty in Biden’s circle, with staff unsure what their lives will look like months from now.

That’s a particular concern because many of the party’s top minds who helped elect Biden and President Barack Obama to the White House have already joined Clinton’s vast team.

Among the names they’ve discussed are Obama campaign ad guru Larry Grisolano and former White House communications director Anita Dunn, who recently met with Biden at his home. Grisolano worked on Biden’s 1988 campaign and remains close to business partner and Biden adviser Mike Donilon, but said he hasn’t had discussions about working on a Biden campaign. Dunn also consults for the Democratic National Committee, which would be an obstacle to taking sides in the primary.

The waiting game has made for a period of uncertainty in Biden’s circle, with staff unsure what their lives will look like months from now or even when there will be more clarity. One person close to the vice president said he was considering putting off an upcoming vacation out of concern that it could overlap with a potential announcement.