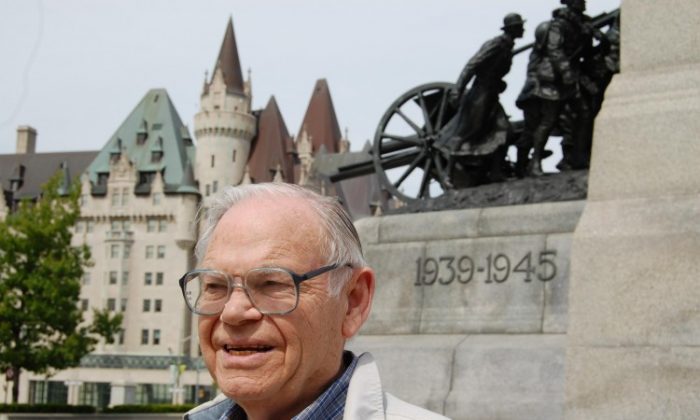 Setsuko Thurlow, Member of the Order of Canada and Hiroshima survivor, said humanity has a serious lesson to learn from the 1945 bombing. She uses her experience as motivation to encourage others to appeal to their governments for the elimination of nuclear weapons. (Kristina Skorbach/ The Epoch Times)
US

TORONTO—August 6, 2012, marked another milestone in the effort to eliminate nuclear weapons.

Two Hiroshima atom bombing survivors, Setsuko Thurlow, Member of the Order of Canada, and Joe Ohori, are using commemorations of the 67th anniversary of the tragedy to propel a warning about the threat posed by nuclear weapons.

Thurlow, along with 600 other Members of the Order of Canada, has signed an appeal to the federal government to support an international elimination of nuclear weapons.

The initiative, led by Officer of the Order of Canada Murray Thomson, also encourages the government to support U.N. Secretary-General Ban Ki-Moon’s Five-Point Plan for Nuclear Disarmament. This plan includes a convention to ban all nuclear weapons.

Thurlow said humanity must learn the lesson of the 1945 disaster that saw Hiroshima and Nagasaki levelled with atomic bombs. It’s a lesson Thurlow, who lost eight family members in Hiroshima, has spent decades trying to teach. Some 140,000 died in Hiroshima alone.

The House of Commons passed a unanimous motion in 2010 that called on the government to work with Ban Ki-Moon to negotiate the U.N.’s disarmament convention, but that motion has not been acted upon.

Canada’s honoured citizens are not alone in their call for change. On the other side of the planet, more than 750 Members of the Order of Australia have also urged their government to take action by forming the Australians for a Nuclear Weapons Convention group.

“If humanity is to continue, we have to make a choice, we can’t be wishy-washy,” Thurlow said. “If we don’t make a decision, then we are part of the problem.”

That problem is made worse by the terrifying evolution of nuclear weapons, which have grown exponentially more powerful than those dropped in Japan.

At present, five nuclear-weapon states—Russia, France, China, United Kingdom, and the United States—possess some 20,000 nuclear weapons. Lesser amounts are in the hands of India, Pakistan, and North Korea. Israel is believed to have nuclear weapons as well.

Even though Canada doesn’t possess any weapons, Thurlow noted that as a member of NATO, Canada stands behind a policy that outlines the willingness to use nuclear weapons defensively.

Thurlow calls that fact, and the 2010 parliamentary motion to abolish nuclear weapons, a “great contradiction.”

“Canada has to be more honest to the international community,” she said.

Due to their destructive capacity, nuclear weapons should not be considered as part of a country’s defence system at all, she argues. “It has such unparalleled destructive power; it’s not just the destruction caused by a bomb or a canon or something,” she said with tears in her eyes.

Worse, nuclear weapons are unstable and there’s room for human and technical error, not to mention the possibility of the weapons falling into terrorist hands.

“The Canadian government should be taking a stronger stance on this issue,” she said, decrying the relative indifference by the government.

Canada hasn’t made any notable recent efforts to push nuclear-armed states to abolish the weapons, she said. “That saddens me as a citizen of this wonderful country.”

“We have the potential,” she added.

Although over 5,000 cities and 151 nations around the globe have already declared their support of the abolition of nuclear weaponry, there is no sign of progress from the five big nuclear states.

Thomson, who was the coordinator of the Order of Canada members’ project to appeal for nuclear weapon disarmament, said concern has been growing. He cites studies that point to a rising possibility of nuclear destruction.

Part of the problem is that those who make and possess nuclear weapons believe them necessary or have significant investment in the business of nuclear weaponry.

“There are a lot of people making a lot of money in producing nuclear weapons, and in safeguarding them. There’s billions of dollars caught up in it, it’s a major industry now,” Thomson said.

Another survivor of the Hiroshima attack, Joe Ohori, was only 14 when the A-bomb struck the city. A Vancouver-born Japanese, Ohori was receiving his education in Hiroshima with his brother. After the bombing, he moved back to Canada, much to the relief of his parents.

For many years Ohori didn’t think that “waving some posters” or “shouting some slogans” would convince governments to take action. “I’m a little old Joe,” he smiled. Until a few years ago, he didn’t speak publicly about what happened at Hiroshima.

Ohori said that even if none of the main nuclear states use nuclear weapons, “it’s the third and fourth countries that might use [nuclear weapons], so we’ve got to stop that,” he said.

Thurlow and Ohori will spread their message with a row of posters and art staged at Toronto City Hall from the August 6th and 9th commemorating the tragic bombings.

The Hiroshima, Nagasaki Poster and Survivor Art Exhibit will be open to the public at the Toronto City Hall Rotunda.