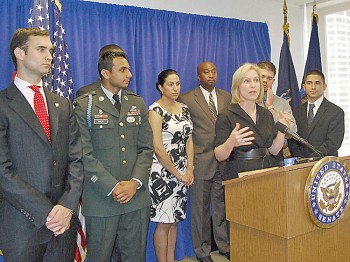 By Catherine Yang
biggersmaller
Print
NEW YORK— Out of 17,000 New York City soldiers who have been in service since 9/11, over 2,000 are currently unemployed.

Sen. Kirsten Gillibrand (D-N.Y.) introduced new legislation that aims to decrease the 20-percent national unemployment rate for young veterans aged 18–24 at a press conference held at her office on Third Avenue on Sunday.

The Hiring Heroes Act of 2011, which Gillibrand is co-sponsoring, aims to equip all returning troops with the tools they need to find jobs through the government’s Transition Assistance Program (TAP).

“All soldiers would be required to participate in military job training programs, where they would get job-search techniques and participate in resume and interview workshops before they leave the military,” Gillibrand said.

Marco Reininger, who served in Afghanistan, is currently a senior at Columbia University. He is part of the first cycle of veterans to go to college on the post-9/11 GI bill.

“We’re graduating into a very difficult job market,” Reininger said. “It’s a problem, because unemployment puts a tremendous amount of pressure onto an already difficult transition from the military into civilian life.”

When soldiers can’t obtain jobs after leaving the service, it not only places extra pressure on them to provide for themselves and their families but also wastes national resources, Reininger added. “We spend millions and millions of taxpayer dollars every year to train the men and women of our military in some of the most cutting-edge technology and some of the most advanced techniques, and not utilizing that and [not] re-injecting it back into the work force is pretty bad economics,” he said.

The new bill would require federal agencies to follow up with the veterans regarding their job searches within six months of entering the program and then every three months for the first year, in order to track the program’s effectiveness. Competitive grants for nonprofits that provide job training and mentorship programs would also help veterans find jobs, Gillibrand said.

Currently, service members cannot apply for certain federal positions until after they leave the service. Under the proposed legislation, however, they would be able to apply while still in service, if they knew when they’d be leaving.

“Agencies also need to find ways to eliminate bureaucratic barriers that prevent veterans who already have relevant skills and technical training learned from the military from landing similar jobs in the civilian workforce,” Gillibrand stated. “For example, a veteran who drove an ambulance in Iraq should be able to come and be able to drive an ambulance for New York City. Right now there’s a lot of paperwork, and you have to be entirely recertified.”

Gillibrand said the bipartisan bill has already passed unanimously in the Veteran’s Committee. She is hoping it will go into effect this year, with the high numbers of soldiers returning.