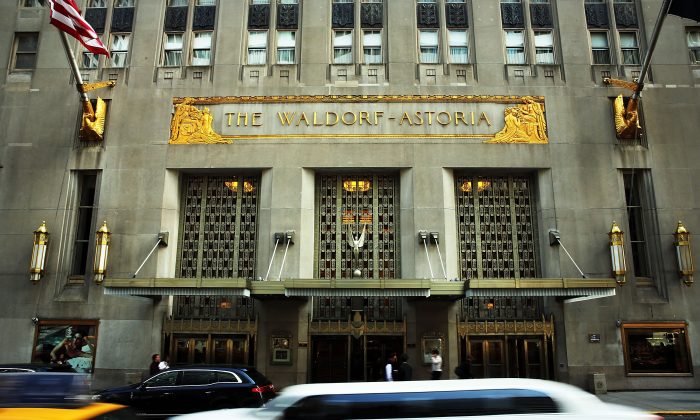 The Waldorf Astoria, the landmark New York hotel, is viewed on October 6, 2014 in New York City. It was announced October 6, that Hilton Worldwide will sell the Waldorf to the Beijing-based Anbang Insurance Group for $1.95 billion. As part of the deal the Waldorf will undergo a major renovation. The Park Avenue hotel opened on October 1, 1931, and claimed to be the biggest hotel in the world at the time, attracting movie stars, politicians and the wealthy. (Spencer Platt/Getty Images)
New York

The world’s largest publicly traded hotel operator is selling one of the most iconic hotels in the world for an unprecedented amount: Hilton’s Waldorf Astoria New York will soon belong to China’s Anbang Insurance Group Co. for $1.95 billion.

The iconic landmark hotel will undergo a major renovation, according to a Hilton Worldwide Holdings Inc. press release Monday.

Hilton announced it entered into an agreement with Anbang to continue to manage the hotel for the next 100 years and oversee the renovations.

“We are very excited to be entering into this long-term relationship with Anbang, which will ensure that the Waldorf Astoria New York represents the brand’s world-class standards for generations to come,” said Christopher J. Nassetta, Hilton Worldwide CEO, in a press release. “This relationship represents a unique opportunity for our organizations to work together to finally maximize the full value of this iconic asset on a full city block in midtown Manhattan.”

The luxury hotel is housed in a 1931 art deco landmark designed by architects Schultze and Weaver, the tallest and largest hotel in the world at the time. Hilton has owned the 1,232-room hotel since 1972.

Hilton had revealed in February it was considering selling part or all of the hotel, but the Waldorf Astoria had not been publicly on the market.

Hilton, which is majority owned by Blackstone Group LP, plans to use the money from the sale to buy other properties in the United States, according to Bloomberg News. A source said Hilton decided to sell rather than take on the costs of the needed renovations.

Beijing-based Angang was founded in 2004, and has over 30,000 employees. The purchase adds to several other large buys from Chinese companies in the past year, including Greenland Holding Group’s 70 percent stake in the 16-tower Atlantic Yards (now Pacific Park) project in Brooklyn and Fosun International’s purchase of 1 Chase Manhattan Plaza from JP Morgan Chase & Co.