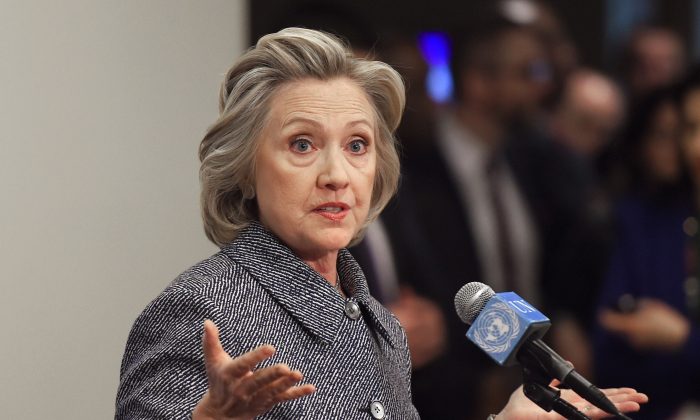 Last week, the House Committee on Benghazi subpoenaed all of Hillary Clinton’s emails during her tenure as Secretary of State that might be related to Libya.

Clinton used her personal email account to conduct governmental affairs when she was Secretary of State from 2009-2013.

Clinton said she turned all of her work-related emails over to the State Department, but the chairman of the Benghazi Committee has called for an independent investigator to check her email archives to verify that claim.

However, it’s unlikely that the Benghazi Committee’s subpoena will turn up anything new.

Hillary Clinton said on Tuesday that she has deleted all of the emails that her team had deemed unrelated to work.

“I chose not to keep my private, personal emails,” Clinton said. “Because they were personal and private about matters I believe were within the scope of my personal privacy and particularly that of other people, they had nothing to do with work, I didn’t see any reason to keep them.”

“The server contains personal communication between my husband and me,” Clinton added. Former president Bill Clinton has stated that he doesn’t use email.

Clinton stated that her team did not delete any emails related to government affairs, and turned over any emails that could be remotely work-related.

My direction to those who conducted the investigation was to err on the side of providing anything that could possibly be viewed as work-related.
— Hillary Clinton

“My direction to those who conducted the investigation was to err on the side of providing anything that could possibly be viewed as work-related,” Clinton said.

Clinton presided over the State Department at the time that an American diplomatic mission was attacked, resulting in the death of a U.S. ambassador for the first time since 1979. Questions have been raised by both Democrats and Republicans about her handling of the affair.

Clinton said that there were over 60,000 emails on her private email account, and that she has turned over 30,000 to the State Department, which leaves around 30,000 personal emails that were deleted.

Her emails were stored on a custom-made email server, which raised concerns about their vulnerability to cyber-attacks. Clinton said that the server was set up for Bill Clinton when he was still president, and was very secure.

“The system we used was set up for President Clinton’s office and it had numerous safeguards, it was on property guarded by the secret service, and there were no security breaches,” Clinton said. “The server will remain private.”

The Federal Record Act requires that state officials keep a copy of their work-related communications for archiving by the federal government, and Hillary said that she fully complied with that law when she turned over more than 30,000 emails to the State Department two months ago.

Clinton use of a personal email account temporarily shielded those records from media scrutiny under the Freedom of Information Act, and ultimately allowed her to choose which emails to turn over to the State Department.

Clinton maintains that she has committed no wrongdoing, but confesses that she regrets using a personal email to conduct state affairs out of convenience.

“When I got to work as Secretary of State, I opted for convenience to use my personal email account, which was allowed by the State Department because I thought it would be easier to carry just one device for my work and for my personal emails instead of two,” Clinton said. “Looking back it would have better if I simply used a second email account and carried a second phone.”

“Without access to Secretary Clinton’s personal server…there is no way to accept State’s or Secretary Clinton’s certification she has turned over all documents that rightfully belong to the American people,” Gowdy said in a statement, adding that Clinton still has the responsibility to turn over all of her emails to a neutral third-party to determine which ones are work-related.

Gowdy also said that the Benghazi Committee will summon Clinton for two testimonies, one to answer questions concerning her emailing practices, and another related to her handling of the terrorist attacks on Americans in Libya.

“Secretary Clinton alone created this predicament, but she alone does not get to determine its outcome,” Gowdy said.