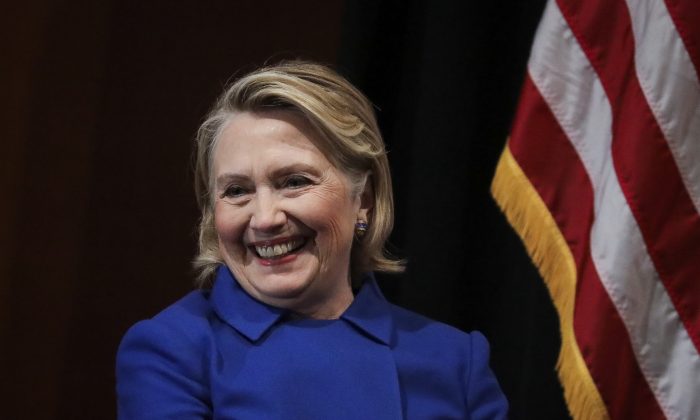 The email with the cover-up reference is contained in FBI notes on a February 2016 interview of an unidentified Platte River Networks official.

Judicial Watch obtained the notes as part of more than 400 previously unreleased FBI documents a federal district court order turned over to the nonprofit as a result of its Freedom of Information Act suit.

In the Dec. 11, 2014, email, an unidentified Platte River Network official told another that “I’m kind of freaking about Gresham. Thoughts on what to do with [name redacted].”

The official responded: “Its all part of the Hillary coverup operation. I’ll have to tell you about it at the party.” A smiling emoji was inserted by the responder between the two sentences.

The “Gresham” reference appears to be to the Chicago-based Gresham Partners LLC. It’s not clear what, if any, connection there is between that firm, which describes itself as “an independent investment and wealth management firm that has been serving select families, family offices and endowments since 1997,” and the “Hillary cover-up operation.”

In another of the newly released documents, an unidentified individual working with an inspector from the Office of the Intelligence Community Inspector General told a Department of State official in a June 27, 2015, email that “I have personally reviewed hundreds of documents in the HRC collection. I can now say, without reservation, that there are literally hundreds of classified emails in this collection; maybe more.”

It is not known from the documents how many emails were contained in the reviewed collection in which the classified emails were found by the unidentified individual.

Clinton has repeatedly denied any wrongdoing with the private email system, which included a server located in a bathroom in the New York mansion she shares with former President Bill Clinton.

A year after leaving office, she turned over to the State Department an estimated 30,000 emails that her attorney David Kendall and members of her State Department staff claimed dealt with official business.

She claimed another 32,000 emails were personal and were destroyed using a product known as BleachBit, with no prior independent government review.

Former FBI Director James Comey, in a controversial, nationally televised statement, recommended against prosecuting Clinton in July 2016, but that didn’t prevent crowds of supporters of then-Republican presidential candidate Donald Trump from chanting, “Lock her up, lock her up,” during rallies before and after his election victory.

The Epoch Times reported Feb. 25, 2019, that the Justice Department told Comey that Clinton must have intended to compromise classified documents. The law requires only a showing of “gross negligence.”

Judicial Watch said in an April 8 news release that the new documents it obtained include several that “show Platte River Networks’ use of BleachBit on the Clinton server. The BleachBit program was downloaded from a vendor called SourceForge at 11:42 a.m. on March 31, 2015, according to a computer event log, and over the next half hour, was used to delete the files on Hillary’s server.”

If any of the destroyed emails concerned official U.S. diplomatic business or any other aspect of Clinton’s actions as secretary of state, each of them would represent a potential violation of federal laws and regulations concerning the preservation of official documents.

Bryan Pagliano, a Clinton political appointee, had responsibility for maintaining the private Clinton email system and was paid more than $40,000 by the private Clinton Executive Service Corporation, according to the documents obtained by Judicial Watch.

Pagliano was also found in the newly released documents telling a senior Clinton aide on multiple occasions that he had to deal with a host of problems with the email system, including “virus investigation and cleanup;” “clean up virus from bb [BlackBerry] profile;” and multiple “brute force attacks” against Hillary Clinton’s server, requiring him to “reset password.”

Critics have long claimed that Clinton’s private email system was vulnerable to being compromised by foreign governments, especially those of Russia and China, which operate extremely large and sophisticated digital hacking operations that target the U.S. government agencies and officials, prominent individuals in the political campaign world, and big corporations.

Judicial Watch President Tom Fitton told The Epoch Times on April 8 that he wonders “how many smoking guns is it going to take” before a credible and comprehensive investigation is completed.