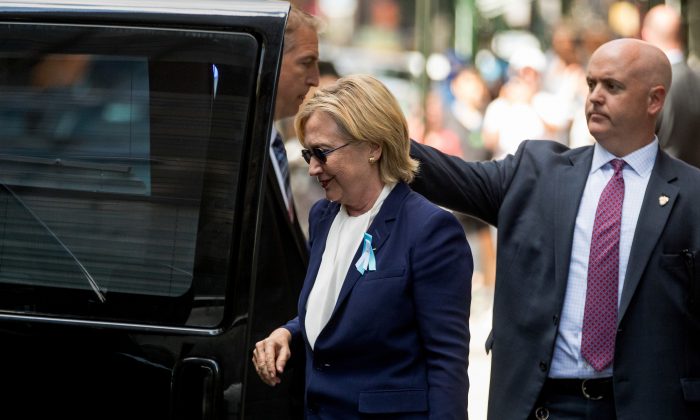 WASHINGTON—Hillary Clinton’s stumbles as she left Sunday’s 9/11 memorial ceremony put her health at the forefront of a presidential campaign in which the two major party nominees are among the oldest ever and have disclosed a limited amount of information about their medical history.

The Democratic presidential nominee “became overheated and dehydrated,” her doctor said, leaving the ground zero ceremony after about 90 minutes. A video of her departure show Clinton appearing to stumble as three staff members hold her up and help her into a van.

The former secretary of state later emerged from her daughter’s nearby apartment, saying she was “feeling great,” and her doctor said Clinton was “recovering nicely.” Still, the episode focused attention on Clinton’s health with eight weeks remaining in a contentious election in which Republican rival Donald Trump has sought to sow doubt about her health and fitness to serve.

The billionaire businessman also attended Sunday’s memorial, and said “I don’t know anything” when asked about Clinton. Trump has repeatedly questioned Clinton’s health, telling supporters last month she “lacks the mental and physical stamina” to serve as president and fight Islamic State militants.

It’s an accusation that Clinton has sought to play off as a “wacky strategy” from Trump and evidence that he embraces an “alternative reality.” She poked fun of the idea during an appearance on ABC’s “Jimmy Kimmel Live” last month, jokingly opening a pickle jar as proof of her vigor.

“There are plenty of people who may stumble around on a hot humid day for lots of reasons,” Caplan said. “Without examining, without having the history … you don’t have a basis to say anything.”

Hours later, Clinton’s campaign provided an explanation, releasing a statement from her doctor, Lisa Bardack, that said Clinton was diagnosed with pneumonia on Friday. “She was put on antibiotics, and advised to rest and modify her schedule,” Bardack said in a statement. “While at this morning’s event, she became overheated and dehydrated. I have just examined her and she is now rehydrated and recovering nicely.”

In 2008, Republican nominee John McCain made public more than a thousand pages of his medical history to show he was cancer-free and fit to serve as president at age 71. Neither Clinton or Trump have released anything approaching that level of detail.

Bardack, an internist who has been Clinton’s personal doctor since 2001, released a two-page letter in July 2015 that said Clinton was in “excellent physical condition and fit to serve as president of the United States.”

Trump’s gastroenterologist, Dr. Harold Bornstein, wrote a four-paragraph letter claiming Trump would be “the healthiest individual ever elected to the presidency.” He later told NBC News it took him just five minutes to write it.

While Clinton has released more information than Trump, Caplan said neither candidate has offered voters a sufficient record. He said that ideally, presidential nominees should allow an independent panel to assess their health.

“Since we can’t get that done for taxes, I don’t think we’re going to get it done for health,” he said, referencing Trump’s refusal to match Clinton’s release of her personal tax records.

At 69, Ronald Reagan was the oldest person to be elected president when he won in 1980. Trump turned 70 in June, while Clinton will have just turned 69 if she wins the White House.

But aging researcher S. Jay Olshansky, of the University of Illinois at Chicago, said Sunday that age alone shouldn’t be a disqualifier for presidential candidates. While people are increasingly vulnerable to illness as they age past 70, there are also better medical treatments than ever before. Our “concept of old,” he stressed, has changed.

Clinton’s health has been a lingering source of speculation among her critics, dating to well before she announced her second White House campaign. Republican strategist Karl Rove called a concussion Clinton sustained in 2012 a “serious health episode” and suggested two years later she may have suffered a brain injury.

Last week, Clinton had an extensive coughing fit during a Labor Day rally in Cleveland, making it difficult for her to speak for about two minutes. She drank water and took a lozenge at the podium, going on to finish her remarks.

She also struggled with a cough during a question-and-answer session with reporters aboard her campaign plane last week. She said she suffers from seasonal allergies and had increased her dosage of antihistamines.

In a campaign podcast last month, Clinton said she does yoga and walks on the treadmill to stay fit. Trump, who famously dines regularly on fast food, has said he gets most of his exercise from playing golf and speaking at a podium during his campaign rallies. He plans to discuss his health regimen this week during an appearance on “The Dr. Oz Show.”

Clinton’s supporters have dismissed questions about her health by pointing to her globe-trotting schedule as secretary of state and lengthy appearance before Congress investigating the 2012 Benghazi attack, in which she sat for 11 hours.

Asked last week if she was concerned about “conspiracy theories” related to her health, Clinton said she wasn’t.