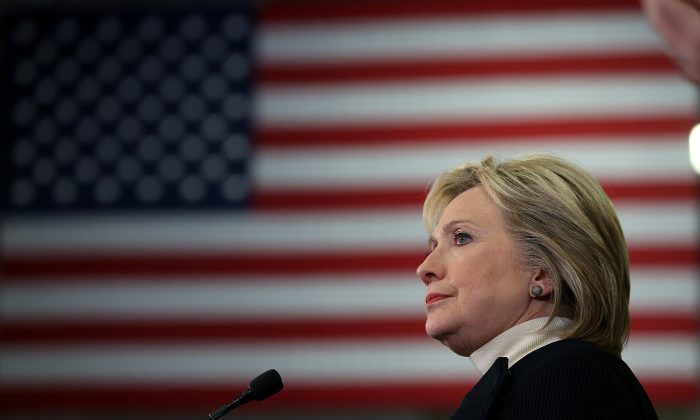 Unlike Bernie Sanders, Hillary Clinton has outlined a tough-minded strategy to defeat the Islamic State (ISIS). Part of her “Smart Power” foreign policy, it uses the optimal combination of tools—diplomatic, economic, military, political, technological, and cultural.

Destroying ISIS, she told the Council on Foreign Relations last November, should be part of a comprehensive counterterrorism campaign. Specifically, the 65-member international coalition must intensify its efforts to deny ISIS control of territory. This necessitates more allied planes, more strikes, a broader target set, and an immediate “intelligence surge” to identify and eliminate ISIS’s command, control, and economic lifelines.

Clinton and others feel that Russia and Iran must accept the reality that propping up a vicious dictator will not bring peace and stability.

Airstrikes should be combined with ground forces to retake territory. Increased support from Arab and European partners is needed, including soldiers contributing to effective fighting on the ground. Saudi Arabia and the U.A.E. agree with ground intervention, but will send soldiers to Syria only if the United States leads the effort. The United States should be prepared to deploy more special operations forces.

In Iraq, Clinton noted, courageous Kurdish fighters have retaken communities from ISIS. However, the ground campaign there will only succeed if more Iraqi Sunnis join it. Coalition troops could advise and train them so that they gain greater confidence in their own capacity to confront ISIS. Baghdad should arm Sunni and Kurdish forces, but, if it won’t, the “Inherent Resolve” coalition that the United States heads should do so independently.

Clinton and others feel that Russia and Iran must accept the reality that propping up a vicious dictator will not bring peace and stability. The coalition must work with Putin/Russia toward an outcome that preserves Syria as a unitary, nonsectarian state, with protected rights for all Syrians and with its key national institutions intact.

No-fly zones to stop Assad from dropping “barrel bombs” on civilians and moderate opposition groups are crucial, Clinton judges. With material support from the coalition, opposition forces could help create safe areas where Syrians could remain rather than fleeing toward Europe. This approach would help the opposition to retake the remaining stretch of the Turkish border from ISIS, choking off its supply lines.

The strategy’s success on both sides of the border depends on the actions of the coalition’s Arab and Turkish partners. The former has been concerned about the threat from Iran. To her credit, Clinton has laid out a comprehensive plan to counter Iranian influence and its support for terrorist proxies such as Hezbollah and Hamas.

Turkey has focused more on reigniting its fight with Turkish Kurds than on countering ISIS. Ultimately, the coalition’s efforts will only succeed if the Arabs and Turks carry their share of the burden, with military, intelligence, and financial contributions, and use their influence with Iraqi and Syrian fighters and tribes.

Clinton believes that if the coalition presses forward on both sides of the Iraq–Syria border in the air and on the ground, it can crush ISIS’s enclave of barbaric terror.

Clinton believes that if the coalition presses forward on both sides of the Iraq–Syria border in the air and on the ground, it can crush ISIS’s enclave of barbaric terror.

As the coalition works out a broader regional approach, it should, she suggests, be consulting with Israel, its strongest ally in the Middle East. It shares with Arab partners and has the opportunity to do more both in intelligence and in combined efforts.

President Obama recently asked Congress to formally authorize the use of military force in the war against ISIS by passing the Authorization for the Use of Military Force (AUMF). Clinton concurs that by passing an updated authorization, Congress will send a message that the United States is committed to the fight.

She adds: “We should (not) again have 100,000 American troops in combat in the Middle East. If we have learned anything from 15 years of war in Iraq and Afghanistan, it’s that local people must secure their own communities. We … (should) help them, … but we cannot substitute for them… (W)e can and should support local and regional ground forces in carrying out this mission.”

Clinton believes that the time for more delay is over and is correct in urging us to “get this done.” If the Syrian cease-fire recently announced by the United States and Russia proves successful, it will help create a new system that could become the backbone for a new international policy dovetailing with Hillary Clinton’s plan to defeat ISIS quickly and then start building a world with “more partners and fewer adversaries.” The coalition, working with moderate opposition troops supported by airpower, should be able to defeat ISIS militarily in weeks rather than months.