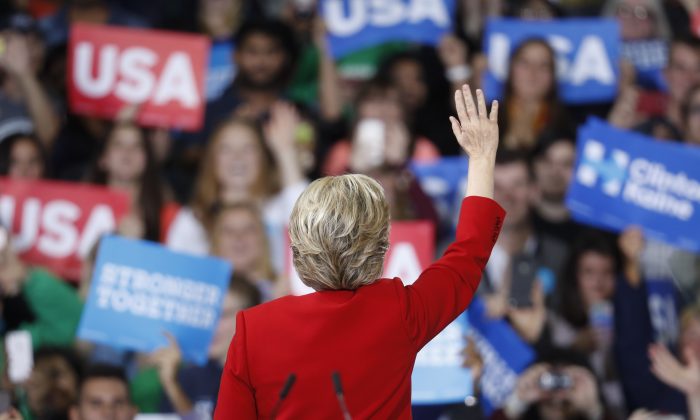 Former Democratic presidential nominee Hillary Clinton sent a New Years-themed message to her supporters, thanking them while calling on them to push onward in 2017.

“Before this year ends, I want to thank you again for your support of our campaign. While we didn’t achieve the outcome we sought, I’m proud of the vision and values we fought for and the nearly 66 million people who voted for them,” Clinton wrote to her supporters on Monday, The Hill reported. “I believe it is our responsibility to keep doing our part to build a better, stronger, and fairer future for our country and the world.”

Since Election Day, neither Clinton nor her husband, former President Bill Clinton, have made many public statements or have been seen in public, other than a few selfie-style photos of her hiking near her home in Chappaqua, New York.

Joe Biden: Hillary Clinton Never ‘Really Figured Out’ Why She Ran for President

A few weeks ago, Clinton appeared at an event for her donors, reportedly telling them that Russian President Vladimir Putin personally interfered in the election, and she claimed “he has a personal beef against me,” the New York Times reported. “Putin publicly blamed me for the outpouring of outrage by his own people, and that is the direct line between what he said back then and what he did in this election,” Clinton said, according to The New York Times.

Again, Hillary and Bill Clinton were spotted at Christmas Eve church services on Saturday night near their New York home.

In the letter, Clinton also referenced the popular vote count, saying “66 million people” voted for her and the values she represented. According to The Associated Press’ final vote tally, Clinton secured more than 2.9 million votes over President-elect Donald Trump, who easily took the Electoral College by more than 70 votes.