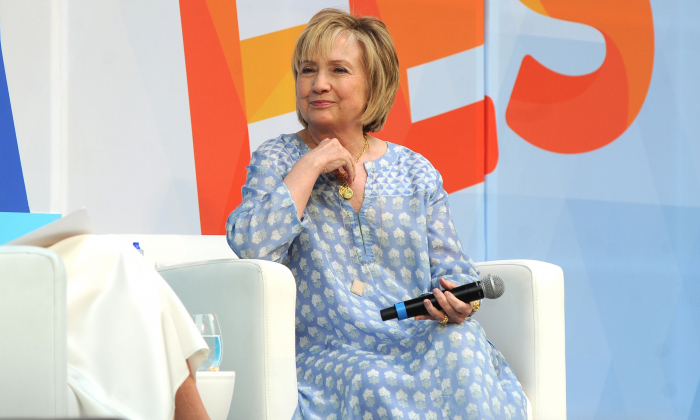 Hillary Clinton Says She Isn’t Running for President in 2020

Hillary Clinton said she will not run for president in 2020 and appeared to rule out future bids for public office.

“I’m not running, but I’m going to keep on working and speaking and standing up for what I believe,” Clinton, a former secretary of state, U.S. senator, and first lady, told News12 Westchester on March 4.

Clinton, who lost the 2016 presidential election to then-candidate Donald Trump, had kept her plans for 2020 under wraps until the News12 interview.

While she won’t be running for president, Clinton said she’ll remain vocal in politics.

“I want to be sure that people understand I’m going to keep speaking out,” Clinton said. “I’m not going anywhere. What’s at stake in our country, the kind of things that are happening right now are deeply troubling to me.”

“And I’m also thinking hard about how do we start talking and listening to each other again? We’ve just gotten so polarized. We’ve gotten into really opposing camps, unlike anything I’ve ever seen in my adult life,” she continued.

Asked if she would run for public office, Clinton said, “I don’t think so.”

During a portion of the 2016 campaign, Clinton was under investigation by the FBI for her use of an unauthorized private email server for all of her communications when she served as secretary of state under President Barack Obama. The investigation determined that Clinton sent or received more than 100 emails and 52 email chains that contained classified information, including emails classified above the top-secret level.

Then-FBI Director James Comey exonerated Clinton in an unprecedented statement in July 2016. While he noted that “any reasonable person” in Clinton’s position should have known better than to send top-secret emails on an unsecured server, Comey concluded that “no reasonable prosecutor” would indict Clinton for mishandling classified information.

Comey made the exoneration statement days after Clinton’s husband, former President Bill Clinton, secretly met with Attorney General Loretta Lynch on an airport tarmac. The meeting was leaked to the press, raising questions about the impartiality of the Justice Department (DOJ).

The FBI conducted its interview with Clinton in the days between the tarmac meeting and Comey’s exoneration statement. Clinton—who was allowed to bring lawyers who were also witnesses in the case—testified without being under oath and wasn’t asked about the tarmac meeting, among other issues.

In another unprecedented move, Comey publicly reopened the Clinton-email probe in October 2016, a week before Election Day. The reopening was prompted by the discovery of hundreds of thousands of Clinton emails on the laptop of former Rep. Anthony Weiner, the husband of top Clinton aide Huma Abedin. The emails were discovered in a separate investigation into Weiner’s illegal sexual communications with a minor girl, of which he’s since been convicted. Comey exonerated Clinton days before the election.

At the same time, the FBI was also investigating the Trump campaign for alleged collusion with Russia. It has since been revealed that the FBI used an unverified, Clinton- and Democratic National Committee-funded opposition research dossier as a premise to surveil the Trump campaign. FBI and DOJ officials who signed off on the warrant application failed to disclose that Clinton and the DNC paid for the dossier and that the research was compiled by a former foreign spy who wanted Trump to lose the election. Nearly all of the FBI officials involved in Crossfire Hurricane have since been fired, demoted, or left the bureau.

The 2016 campaign was marred by infighting within the Democratic Party after emails hacked from Clinton campaign Chairman John Podesta revealed officials at the DNC developed hatred against and helped defeat Clinton’s opponent in the Democratic primary, Sen. Bernie Sanders (I-Vt.).