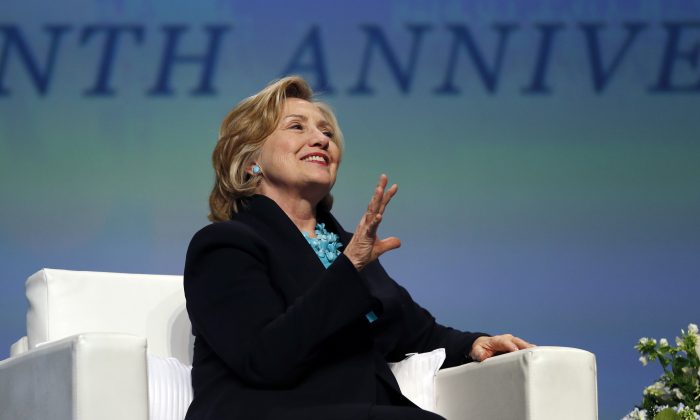 WINNIPEG, Manitoba—Hillary Rodham Clinton on Wednesday declined again to take a position on the Keystone XL pipeline, telling an audience in Canada that she would not express her views because of an ongoing review by the State Department.

“We have differences and you won’t get me to talk about Keystone because I have steadily made clear that I’m not going to express an opinion,” said Clinton, a potential 2016 Democratic presidential candidate. “It is in our process and that’s where it belongs.”

Clinton was asked about U.S.-Canadian relations during a wide-ranging question-and-answer session in Winnipeg as Congress considers approving construction of the contentious, Canada-backed project. Making her first public remarks in a month, Clinton also touched upon the deadly terrorist attacks in Paris, President Barack Obama’s State of the Union address and the debate in Congress over Iran.

Biden’s a Long Shot to Beat Hillary, but He Still Might Go for It

Her views on Keystone have been closely watched in Canada. She has said it would be inappropriate for her to comment on whether the pipeline project should move ahead, given her past role as Obama’s top diplomat and the State Department’s ongoing assessment. Clinton was speaking later in the day at a similar event in Saskatoon, Saskatchewan.

Obama has vowed to veto the congressional legislation as long as the State Department is still conducting a formal review of the project.

The TransCanada Corp. pipeline would carry more than 800,000 barrels of crude oil a day from Alberta and the U.S. Bakken oil field across six U.S. states to refineries on the Texas Gulf Coast.

The House authorized construction of the pipeline last week, and the Senate is now considering the legislation. Republican and Democratic supporters hope to win final approval on the measure and send it to the White House by the end of the week.

Republicans, the Canadian government and business and labor groups have pressured the Obama administration to approve the pipeline, arguing it would create jobs and move North America toward energy independence. Environmentalists want Obama to reject the pipeline, contending it would contribute to global warming and make the U.S. more vulnerable to oil spills.

For a possible Democratic presidential candidate, the politics of Keystone are tricky. Environmentalists and labor unions have been among the party’s core supporters for years, and picking sides could alienate either group. One of the leading opponents is billionaire environmentalist Tom Steyer, who has poured millions of dollars into a super PAC that has promoted environmental causes.

Republican National Committee spokeswoman Kirsten Kukowski criticized Clinton’s Keystone stance, saying if she “can’t take a position on building a pipeline Americans overwhelmingly support, how can voters expect her to make the hard choices that come with being commander-in-chief and leader of the free world?”

Appearing onstage before nearly 2,000 people at an event sponsored by CIBC, a Canadian bank, Clintoncommented on several American and international developments, including:

Clinton has largely stayed out of public view since mid-December. Her two paid speeches came as she is beginning to assemble the makings of a presidential campaign, though she has yet to announce her intentions. Clinton is working with close advisers and several former Obama campaign aides to prepare for the 2016 race and is expected to make a final decision in the spring.