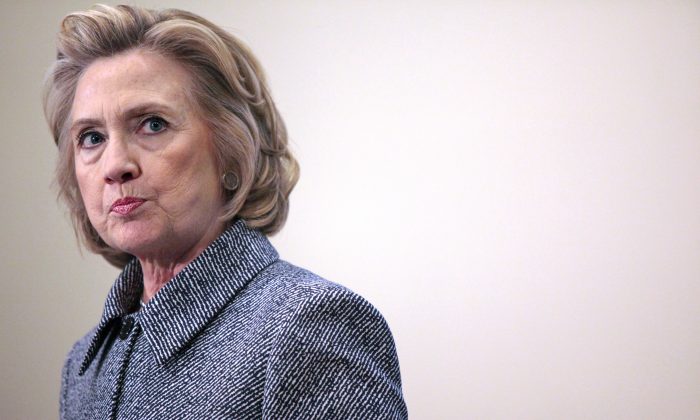 NOT FOR PRINT: Former United States Secretary of State Hillary Clinton at the United Nations in New York City on March 10, 2015. Clinton answered questions about recent allegations of an improperly used email account during her tenure as Secretary of State. (Photo by Yana Paskova/Getty Images)
US

Hillary Clinton expressed regret for exclusively using a personal email account during her tenure as secretary of state, but defended the practice as legal, and stated that any transparency concerns would be addressed by the over 30,000 emails she had turned over to the State Department.

“Looking back it would have been smarter to have used two devices,” Clinton said Tuesday at the United Nations, in her first public remarks since her personal email account emerged as a point of controversy last week. “But I have absolute confidence that everything that could be in any way connected to work is now in the possession of the State Department.”

Clinton’s use of a personal email account to conduct state affairs has raised ethical concerns from government transparency watchdogs, as a private account allowed her to temporarily shield her emails from scrutiny by the press under the Freedom of Information Act. Multiple media outlets have failed in requesting emails from Clinton over the years as a result, and several federal lawsuits have been filed against the State Department over Clinton’s emails.

White House guidelines at the time forbid government employees from accessing both their personal and government email address on the same device, so Clinton opted out of using a government account altogether.

To comply with the Federal Records Act, Clinton stated that she meticulously sent out every email related to work to someone with a state.gov account so that it would be archived.

During her time as secretary of state, Clinton sent out and received 62,320 emails on her personal email account, of which 30,490 were turned over to the State Department in printed form in December. Clinton’s attorneys presided over the process, delivering emails that were either sent to a .gov address, to any one of more than 100 high-level State Department or U.S. officials, or were listed under a search for “Libya” or “Benghazi.”

“I took the unprecedented step of making all of my work-related emails public,” Clinton said. “The laws and regulations in effect when I was secretary of state allowed me to use my email for work. That is undisputed.”

Still, the House Committee on Benghazi finds Clinton’s efforts at transparency unsatisfactory, and last week filed a subpoena to have an independent investigator look through Clinton’s email account, which is hosted on the custom-made clintonemail.com server at her home. It’s unlikely that a third-party will find anything, however, as Clinton revealed Tuesday that the remaining 31,830 emails had been deleted.

“At the end, I chose not to keep my private personal emails, emails about planning Chelsea’s wedding or my mother’s funeral arrangements, condolence notes to friends as well as yoga routines, family vacations, the other things you typically find in inboxes,” Clinton said.

The former secretary of state’s rationale for the deletion was simple: there was no reason to keep them.

“Because they were personal and private about matters that I believed were within the scope of my personal privacy and that particularly of other people. They have nothing to do with work, but I didn’t see any reason to keep them,” Clinton said.

She also dismissed any concerns that her aides could have deleted any correspondences related to state affairs.

“In fact, my direction to conduct the thorough investigation was to err on the side of providing anything that could be possibly viewed as work related,” Clinton said. “That is the responsibility of the individual and I have fulfilled that responsibility, and I have no doubt that we have done exactly what we should have done.”

Clinton’s remarks appear to have only aggravated the Benghazi Committee, whose chairman said that Clinton’s response has “created more questions than answers.”

“Without access to Secretary Clinton’s personal server, there is no way for the State Department to know it has acquired all documents that should be made public,” Rep. Trey Gowdy (R-S.C.) said in a statement, arguing that the department’s delay in revealing her email habits has undermined its credibility. Gowdy called for a “detached third-party arbiter who can determine, which documents should be public.”

Clinton stated the her email server “will remain private.”

At the U.N., Clinton also took the chance to address concerns raised over donations to the Clinton Foundation by foreign governments, some of which have unsavory records on human rights.

“I’m very proud of the hundreds of thousands of people who support the work of the foundation and the results that have been achieved for people here at home and around the world,” Clinton said. “I think that we are very clear about where we stand, certainly where I stand, on all of these issues. There can’t be any mistake about my passion concerning women’s rights here at home and around the world.”

Clinton’s email habits as secretary of state has emerged as one of the most prominent issues in the run-up to the 2016 Democratic presidential primary, with Clinton playing the role of the default candidate. When asked how the controversy might derail her chances in the primary, Clinton predictably displayed confidence that she’ll retain the support of the American people.

“I trust the American people to make their decisions about political and public matters,” she said.