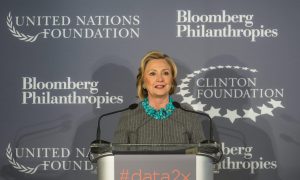 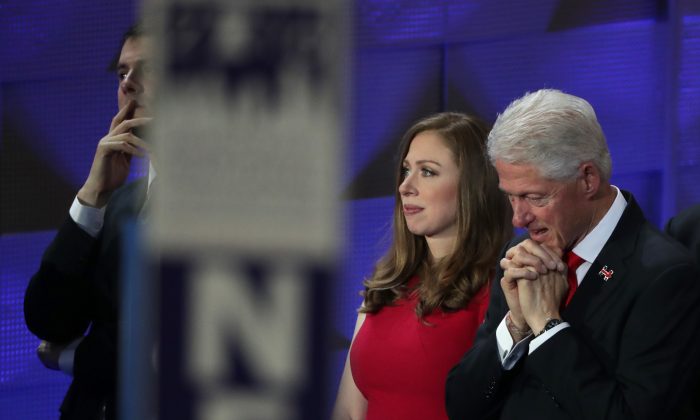 Chelsea Clinton and former US President Bill Clinton seen at the end of the fourth day of the Democratic National Convention at the Wells Fargo Center, July 28, 2016 in Philadelphia, Pennsylvania. (Alex Wong/Getty Images)
Politics

Hillary and Bill Clinton defended their foundation on Wednesday, as a spokesperson confirmed Chelsea Clinton will not leave the organization’s board.

Bill Clinton previously said that if Hillary Clinton is elected, the Foundation will not accept donations from foreign government and corporations. He also said the Clinton Global Initiative will shut down. However, the Foundation’s largest project, the Clinton Health Access Initiative, might continue to accept foreign government and corporate contributions, officials told the Wall Street Journal on Wednesday.

Chelsea Clinton to Stay on Board

Chelsea Clinton will remain on the board after discussing plans for her to leave, the foundation’s spokesman Craig Minassian told the Journal.

A spokeswoman for the former First Daughter said she plans to stay on the board because she “is committed to ensuring that those benefiting from the foundation’s work will be able to continue receiving that often life-changing help.”

It is not certain whether Chelsea Clinton will keep raising funds for the Foundation. The spokesperson said Chelsea Clinton was staying on the board to “steward the implementation of changes,” including “new fundraising policies.”

The plans come at a time when Hillary Clinton’s ties to Clinton Foundation donors have been under scrutiny. Newly released emails of Clinton’s aides by conservative watchdog Judicial Watch show top organization donors requesting meetings or favors from Clinton while she was secretary of state.

Clinton’s relationship to the foundation’s donors was also criticized after an Associated Press report earlier this week said that over half of the people outside of government who met with her while she was secretary of state donated to the family organization. The AP article stated that it did not include meetings with U.S. federal employees or foreign government representatives because such meetings would have been part of her diplomatic duties.

At least 85 out of 154 people from private interests who met or had phone conversations scheduled with Clinton while she was secretary of state had donated to the Clinton Foundation or pledged commitments to its international programs. In total, the 85 donors contributed as much as $156 million, while at least 40 donated more than $100,000 each, and 20 gave more than $1 million.

The Democratic nominee said the AP report had “a lot of smoke and no fire.”

“This AP report, put it in context. It excludes nearly 2,000 meetings I had with world leaders,” Clinton told CNN’s Anderson Cooper on Wednesday.

“It draws a conclusion and makes a suggestion that my meetings with people like the late, great Elie Wiesel or Melinda Gates or the Nobel Prize winner Muhammad Yunus were somehow due to connections with the foundation instead of their status as highly respected global leaders,” she added.

She also said the foundation “went above and beyond anything that was required” in disclosing information while she was secretary of state.

Also on Wednesday, Bill Clinton defended the foundation while he was in Atlanta and said he was proud of it.

“If there’s something wrong with creating jobs and saving lives, I don’t know what it is. The people who gave the money knew exactly what they were doing. I have nothing to say about it except that I’m really proud. I’m proud of what they’ve done,” he added.

Clinton also defended his wife’s contact with foundation donors while she served as secretary of state.