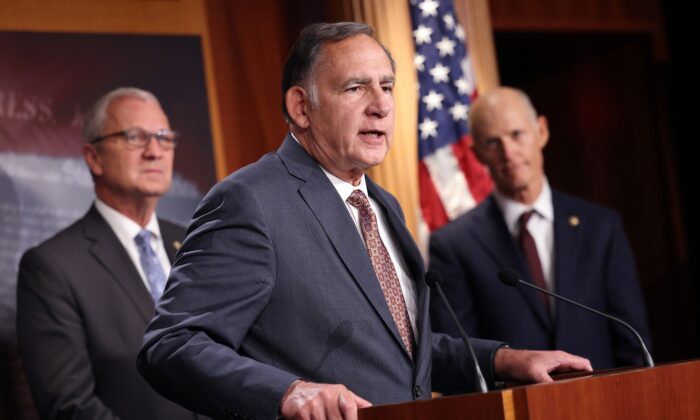 Sen. John Boozman (R-Ark.), blamed President Joe Biden for soaring levels of inflation, the highest since the early 1980s. Photo was taken at the U.S. Capitol in Washington on Aug. 4, 2021. (Kevin Dietsch/Getty Images)
US

Congressional Republicans ripped into President Joe Biden’s economic policies on March 10, saying they were the main cause of the 7.9 percent annual inflation rate announced by the Bureau of Labor Statistics (BLS).

The 7.9 percent rate is the highest since 1982, with the energy component zooming 25.6 percent and food prices showing the biggest increase of any 12-month period since 1981, according to BLS.

“I consider this a national emergency and I say that as the ranking Republican on the Senate Agriculture Committee,” Sen. John Boozman (R-Ark.) told reporters at the Senate Republican news conference.

The Arkansas Republican showed reporters a chart of price increases in the four major agricultural factors that shape the cost of food to consumers and other products from February 2021 to last month.

Natural gas and diesel are required to run equipment and to control temperatures in facilities for humans and animals.

“This thing is moving so, so very fast, and when costs go up for our farmers and ranchers, it’s a bad day for rural America, and it’s a bad day for everyone who works so hard to purchase the food that they need, to put it on their table,” Boozman said.

“In essence, everyone loses.”

Boozman was joined by GOP colleagues who unanimously held up Biden’s policies as the chief culprit in the spiraling costs to consumers of basic necessities such as food, energy, and shelter.

“This increase isn’t just due to what’s happening in Ukraine, it is due to the Biden administration’s policies,” Sen. Deb Fischer (R-Neb.) said. “The national average for a tank of gas is $4.25 and in some areas of the country, it is much higher than that.”

Fisher said the added costs for the typical American family from higher gas prices is about $2,000 a year. She cited the case of a constituent with a small business who claimed his energy bill last month was $40 and nearly $300 this month.

“What does President Biden say? He says he can’t do much about it. That’s unacceptable. We need to restore American energy independence,” she said, referring to the fact the United States was a net exporter of energy when President Donald Trump left office.

“Joe Biden truly is the president of high prices,” Sen. John Barrasso (R-Wyo.) told reporters. Pointing to the media, Barrasso said, “most of you are under 40 and have never seen inflation this high in your lifetime.

But Biden and his allies among congressional Democrats countered that the Russian invasion of Ukraine, not the administration’s environmental and energy policies, are the reason inflation is soaring.

“Today’s inflation report is a reminder that Americans‘ budgets are being stretched by price increases and families are starting to feel the impacts of Putin’s price hike. A large contributor to inflation this month was an increase in gas and energy prices as markets reacted to Putin’s aggressive actions,” Biden said in a statement issued by the White House shortly after the BLS announcement.

“Thanks to investments put into place by President Biden and Democrats in Congress, our economy is recovering faster than predicted.

“We’re experiencing record-breaking GDP growth and job creation, but Putin’s invasion of Ukraine is pushing up food and gas prices, and pandemic-induced supply chain backlogs are depriving workers of the full benefits of the strongest wage growth we’ve seen in years.”

Sen. Bob Casey (D-Pa.) wrote on Twitter that he believes the new CPI figure demonstrates the importance of enacting Biden’s policies, noting that “we must make generational investments in families, from an expanded Child Tax Credit to universal pre-K.”

“Inflation is a global challenge, but the federal government has the ability and responsibility to shield American families from the worst of it.”