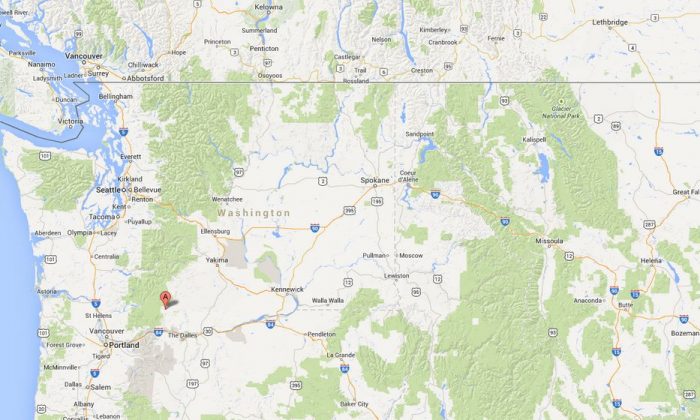 A screenshot of Google Maps shows Trout Lake in Washington state.
US

Hikers on Pacific Crest Trail in Washington state were rescued on Tuesday night. But two other hikers on the snowy trial are still missing.

SEATTLE (AP) — A Coast Gard helicopter on Tuesday night rescued two of four hikers who have been the subject of rescue efforts in remote parts of southwest Washington, a sheriff’s officer said.

Search officials planned to renew their efforts Wednesday to locate a man and a woman missing in separate areas of Skamania County.

They called for help Monday after snow obscured their route. They had walked all the way from Mexico on the trail only to run into early season snowfall in their attempt to reach the Canadian border.

Ground searchers who had the pair’s GPS location got within three-quarters of a mile of them on Tuesday before waist-deep snow and fading daylight forced them to turn back.

Rescue officials are still trying to locate a third hiker on the Pacific Crest Trail.

Alejandra Wilson was reported overdue on Monday after she failed to check in with her father, Dane Wilson, of Portland, Ore., as expected. She was believed to be about a day’s hike ahead of the other pair, or about 20 miles farther north.

Her father reported that he last heard from her Friday as she was leaving Trout Lake, a tiny hamlet south of Mount Adams, for White Pass, Cox said.

More than 40 ground searchers and four dog teams searched Tuesday for Kristopher Zitzewitz, 31, of Portland, who became separated from his partner in the Big Lava Beds area of Gifford Pinchot National Forest on Saturday.

Cox said his office has requested that many ground searchers again for Wednesday, as well as ATVs, 4-wheeled vehicles, and air support if weather permits.

Margiotta, Arnold and Wilson all kept online journals of their travels. Arnold last updated hers on Friday and described having recently encountered Wilson.

Arnold also wrote of having nearly run out of food after storms forced her and Margiotta to huddle under a tarp for four days — long delaying their arrival in Trout Lake.

“We finally made it to Trout Lake today and another huge storm is rolling in,” Arnold wrote. “Everyone says we can’t make it because of the weather situation, and to be honest it’s quite terrifying, but I can’t fathom coming this far and giving up.”

Snow has been falling in the Washington mountains since the weekend, which was likely the first snow to fall on Pacific Crest Trail hikers, Cox said. Searchers had encountered two other hikers on the trail and persuaded them to turn around.

“The problem with all the snow on the ground is you can’t even tell where the trail is,” Cox said. “Some folks try to push on and wind up getting lost.”

The Pacific Crest Trail runs 2,650 miles from Mexico to the Canadian border.