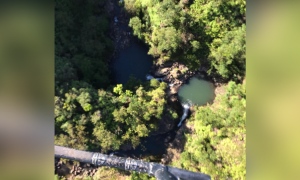 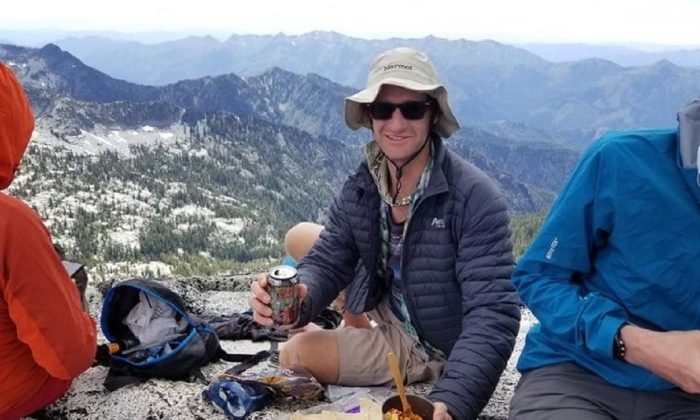 Daniel Komins in a picture taken shortly before his death. (Search efforts for missing hiker Daniel Komins/GoFundMe)
Crime and Incidents

Hiker Who Disappeared Is Found Dead After Three-Day Search

A hiker who vanished in Northern California was found dead, officials said Aug. 18.

Daniel Komins was reported missing on Aug. 15 by his family after failing to return from a five-day trip to the Trinity Alps.

He spoke to his girlfriend on Aug. 11 and spoke with several backpackers who saw him on a trial.

Komins’s car was found on Aug. 15 and a search was launched involving 60 search and rescue personnel and helicopters.

His body was found on Sunday.

“During the late morning, a California Highway Patrol helicopter observed what appeared to be a backpack. The backpack had been off-trail, between L Lake and Mirror Lake,” the Trinity County Sheriff’s Office said in a press release.

“Ground search teams, who were already near the area, went to the location of the backpack in an effort to recover it. The backpack was recovered and later determined to have belonged to Komins. Search and Rescue members continued to search the area near the backpack, and later located Komins, who was deceased.”

Komins’s remains were taken away from the area on a helicopter.

“A preliminary investigation appears to indicate that Komins may have fallen in the steep and rocky terrain. Although this was not the outcome that was wanted, the Trinity County Sheriff’s Office as well as family members of Komins, wanted to thank the Search and Rescue members as well as all other volunteers, for assisting in bringing Daniel Komins home,” the office said.

Komins had last posted on his Facebook page, where he went by Danko Mins, enjoying a meal with the hikers he met.

“I just summited Thompson Peak and am enjoying ice cold double ipa and shrimp tacos at 9,002 feet. On the way I met 4 meandering hikers from the sf bay area and helped guide them to the top,” he wrote.

The group that met with Komins said on Reddit that they passed on the information to law enforcement a few days before he was found.

At one point, a user who said she was Komins’s girlfriend, Carli, asked them to call her.

After the news of Komins’s death broke, a user wrote: “My group passed from L to Mirror lakes where Daniel died a few weeks ago. We skirted a small bench for about 90 minutes before we found the safe route down. Everything else looked quite dangerous.”

A GoFundMe was launched for Komins and People reacted to his death on his Facebook page.

“So sorry to hear the news. My heart goes out to his family, girlfriend and friends. Dan was a bright light. He will be missed by so many in our small community. He was fully in this world. He lived big and shined bright,” wrote one.

“I was going through my high school yearbook on August 12th. I know because I saw this post was made the day before I decided to see how Daniel was doing. I am so sorry to hear he is now gone. My prayers and thoughts go out to his family, girlfriend and close friends. I will always remember how funny he was and the big wide smile he would flash,” another added.

“What a testament to the person that he was (a friend of a friend I did not know him) his last post was one sharing friendship and helping others. Beautiful soul. I’m sorry Joshua that you lost a great friend. Just know you seem to have one heck of an angel on your side now,” another said.

The Blue Lake Volunteer Fire Department added in a post: “It is with great sadness that we have learned of Daniel Komins’s passing. For all of us that new Daniel, we were blessed. For those that never had the pleasure, I’m sorry that you didn’t get that opportunity. He really did put a smile on your face. Let’s keep his family and friends tight in our arms and guide them through these coming days.”