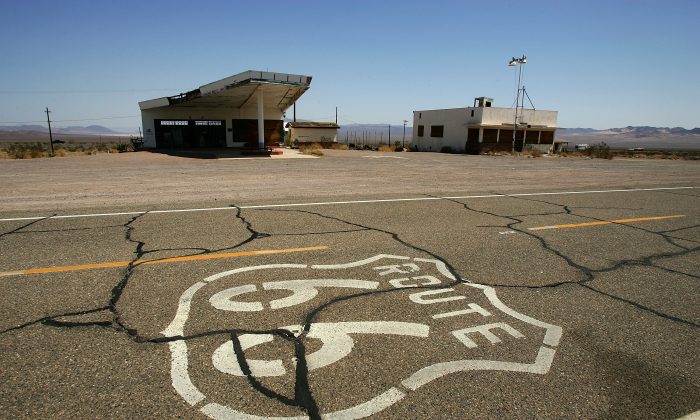 A symbol based on the original Route 66 road signs is seen painted on the highway in Ludlow, Calif., in June 2007. (David McNew/Getty Images)
Opinion

Well, you get what you don’t pay for

No matter how hard lawmakers try to close their eyes, click their heels, and hope for the best, they can’t make highway funding magically appear. But that doesn’t stop them fiddling and flailing as they burn through the Highway Trust Fund.

The Highway Trust Fund was created in 1956 to provide the nation’s surface transportation system with a stable and sustainable source of revenue. It’s supported largely by user fees in the form of federal gas taxes. But with overspending, a gas tax unchanged since 1993, reduced driving levels, and more fuel-efficient vehicles, the trust fund is running on fumes.

Instead of responsibly dealing with the issue, President Barack Obama’s budget for the 2015 fiscal year taps a passel of offsets and gimmicks to fund this spending over the next four years.

In his new budget, the administration proposes a $302 billion four-year surface transportation bill to fund existing grant programs and even create a few new ones for roads, transit, and railroads.

The government only expects the Highway Trust Fund to take in half of that money. To make up the difference, Obama’s plan counts on $150 billion in revenue from “pro-growth tax reform.”

What that might be is left up to the imagination. Even if the budget had laid out specific loophole-closing pay-fors, there’s little chance that tax reform is going anywhere this year. Back in the real world, the Highway Trust Fund will be broke four months from now.

Despite the whimsical accounting laid out for the next four years, even the White House’s draft of the budget treats its own trust fund fix as temporary, noting “the offset does not offer a permanent solution.”

The budget request makes a projection that by 2024 the Highway Trust Fund (which it reconstitutes and renames the Transportation Trust Fund) will be underfunded by $123 billion. But even that grim prediction is sheer fantasy.

To get that number, the budget assumes that after splurging between the 2015 and 2019 fiscal years, transportation spending will drop to current levels. If spending instead continues at the levels prescribed for the next four years, the Highway Trust Fund will be closer to $223 billion in debt.

Well, you get what you don’t pay for.

Back in the 1990s, former Rep. Bud Shuster (R-Pa.), the father of the current House Transportation and Infrastructure Committee Chairman Bill Shuster (R-Pa.), was its chairman. That Shuster successfully fought to drive the trust fund “off budget.”

This meant that the gas tax revenue could only be used on transportation projects. That was great in the years of surplus, but now that we’re living through a prolonged era of deficit spending, the Highway Trust Fund is barred from borrowing.

Yet the fund must have enough revenue in hand to make grants. So, if nothing changes, highway spending in the next few years will have to contract from around $60 billion annually to the $40 billion that it collects every year.

Instead, policymakers need to demonstrate real leadership and set better priorities. Even absent additional revenue, the cash can be spent more wisely.

For instance, in a study we recently released with Smart Growth America, we found that states were spending too much on building new roads and not enough on fixing them. In the long run, this means more and more roads in poor or fair condition and increased repair costs.

Ultimately, our policymakers and lawmakers must align their spending desires with revenue realities. No more raiding the treasury, no more false promises—like the ones driving this unfunded road-spending habit.

Ryan Alexander is president of Taxpayers for Common (Sense.Taxpayer.net). Distributed via OtherWords (OtherWords.org)