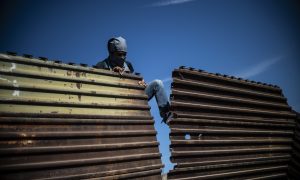 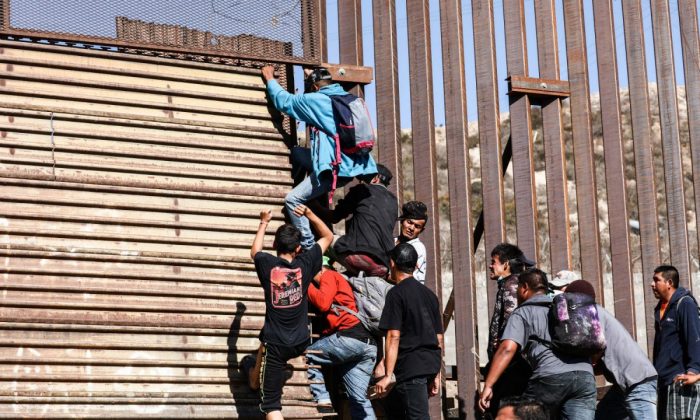 Caravans are using women and children as human shields 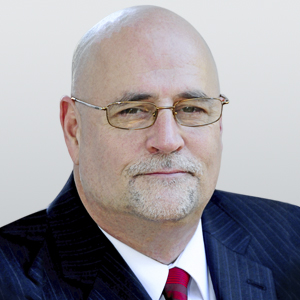 They’re highly organized and are being assisted by multiple agencies of the United Nations and numerous illegal alien-advocacy groups. In the recent rushes to overwhelm the border, migrants placed women and children in front as human shields while they pelted the Border Patrol with rocks.

Emma Lozano, founder of both Centro and Pueblo, is a left-wing activist and a pastor at the Lincoln United Methodist Church in Chicago. She fights the deportation of illegals and wants Illinois to become “an immigrant freedom zone.” She has stated, “We need to change America; we are all America.”

Lozano has been assisted by La Familia Latina Unida founder Elvira Arellano, an illegal alien who advocates for her fellow illegals. She was deported in 1997 but quickly returned. She was arrested again in 2002 for using a false Social Security number. She faced possible deportation but avoided it through the personal intervention of then-Rep. Luis Gutiérrez (D-Ill.) and community pressure.

Both Lozano and Arellano work with another immigrant-advocacy group, the League of United Latin American Citizens (LULAC). Additional help was provided by the CARA Family Detention Project, which offers pro-bono legal help to illegals, and the Popular Assembly of Migrant Families, a Mexico-based group that organizes caravans. Reportedly, CARA has been coordinating caravan efforts with Pueblo Sin Fronteras from bases in the United States.

Centro Sin Fronteras also receives donations from foundations that get government funding. The Catholic Legal Immigration Network (CLINIC) receives about 10 percent of its grant money from the government. CLINIC works closely with CARA, and distributes much of its grant money to Catholic Charities and other organizations specifically to assist immigrants in becoming citizens and to push for amnesty.

CLINIC has received at least $2.2 million from George Soros’ Open Society Foundations since 2002. The Ford Foundation, probably the largest supporter of open borders, has provided $2.9 million since 2011, according to Foundation Search.

Centro also received over $1.5 million from the Illinois Coalition for Immigrant and Refugee Rights (ICIRR) between 2010 and 2012. ICIRR, in turn, gets 80 percent of its funding from the state of Illinois.

From 2015 to 2017, ICIRR received $15.3 million from the Illinois Department of Human Services and other government sources, according to IRS returns. Some of the state money likely came from the federal government’s Refugee and Entrant Assistance State Administered programs, one of numerous HHS grant programs for refugees and illegal aliens. During those same years, the Illinois DHS received $24.6 million through this program.

ICIRR distributed $11,000 to $246,000 in government grant money to each of 59 separate organizations for “Immigrant and Refugee Rights” in 2017 alone. According to its 2015 tax return, ICIRR also “provides comprehensive services to assist Illinois’ more than 325,000 legal permanent residents become U.S. citizens.”

The National Immigration Forum has provided at least $60,000 to Centro Sin Fronteras. NIF describes itself as a “conservative” pro-immigrant organization, but gets its funding, $5.5 million in 2016, from liberal funders, including the Open Society Foundations.

Another extreme Left organization helping out is the National Lawyers Guild, labeled a Communist front by Congress decades ago. It’s a subsidiary of the International Association of Democratic Lawyers, founded as a Soviet propaganda front. NLG has brought volunteer attorneys to help caravan migrants with their asylum applications.

NLG is heavily involved in the open borders movement through its National Immigration Project, and gets ample funding from Soros and others who focus on immigration issues.

The Ford Foundation has provided at least $1.3 million to NLG since 2002. The NLG partners with many open borders groups, for example, CASA de Maryland, an influential Maryland-based illegal alien-advocacy group that also receives government money.

Many media reports focused on the mass of caravan migrants, estimated at anywhere between 4,000 and 12,000, walking doggedly on the 1,000-plus-mile journey to the border. But left unreported, the caravan made most of the trip by bus.

Journalist and filmmaker Ami Horowitz reported directly from Mexico, where he was embedded with the migrants. Horowitz said that the migrants walked some of the way, but that”they had chartered these almost luxury tour buses, just dozens of them.”

Horowitz said that what struck him most was the degree of organization and dollars involved. “[The buses] didn’t come from nothing, this isn’t manna from Heaven. This was highly organized, chartered, and that’s how they got this caravan … 1,000 miles across Mexico,” he said.

Horowitz estimated just the cost of providing water to the caravan is almost $1 million.  He added that the Mexican government didn’t want the caravan in Mexico, so it was always under police escort.

‘Poke Trump in the Eye’

Horowitz also revealed another major source of assistance: the United Nations. He said there were “numerous” U.N. organizations on the ground in Mexico, most prominently, the U.N. High Commissioner for Refugees (UNHCR) and UNICEF. These organizations provided “an incredible degree of services,” including mobile hospitals, children’s’ services and more. They also trained migrants how to speak to the press using words that would inspire sympathy, and gave powerpoint presentations explaining what to tell border agents in order to apply for asylum.

According to Horowitz, in a phone interview, the UNHCR representative admitted that the UNHCR had been involved in the caravan from the beginning, and acknowledged that part of its purpose was to “poke Trump in the eye.”

Horowitz said that the goal of all the groups involved was to “degrade U.S. security … degrade U.S. sovereignty and to create this manufactured crisis, which they did in order to push the agenda.”

Horowitz estimated the caravans to be comprised of about 90 percent men. Women and children were present, but they were a small minority, no doubt included to boost the sympathy factor. When caravan males tried to storm the San Ysidro border crossing in late November, and again on New Year’s Eve, the Border Patrol turned them back with tear gas.

Every migrant interviewed by Horowitz said that they joined the caravan for economic reasons. None cited danger or violence at home. The migrant caravans are also complicating an already difficult job for border agencies.

Preoccupied with those attempting to cross, the border agencies can’t simultaneously protect the more remote areas of the border, leaving many opportunities for drug smugglers and terrorists to enter the United States.

In December of 2018, the Council on American-Islamic Relations announced it intended to assemble activists in San Diego to support the caravans:

“December 10, representatives of chapters of the Council on American-Islamic Relations (CAIR), the nation’s largest Muslim civil rights and advocacy organization, will join hundreds of other faith leaders from around the nation at a solidarity action for asylum seekers at the U.S.-Mexico border in San Diego, as part of the “Love Knows No Borders: A Moral Call for Migrant Justice” mobilization, organized by the American Friends Service Committee (AFSC).” (Emphasis theirs.)

The AFSC is a nominally Quaker group with ties to the Communist Party USA and its Soviet overseers going back to the 1920s. AFSC has also formed an alliance with MEChA, the radical Latino group whose goal is to retake portions of the Southwest sold by Mexico to the United States in 1848.

Even without the caravans, however, recent Southwest border apprehension statistics show that at least 10,000 to 12,000 are coming to the border every week separately.