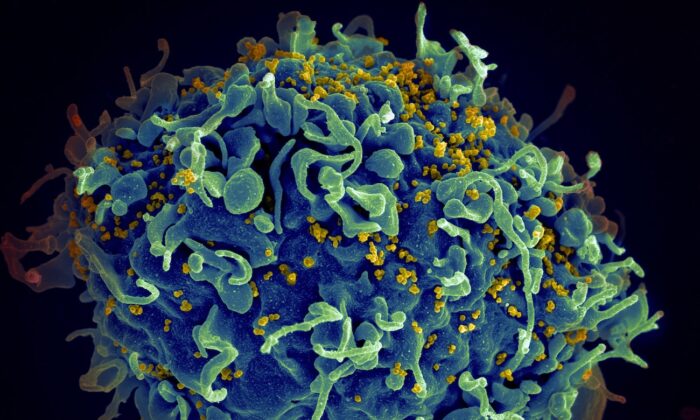 A human immunodeficiency virus (HIV) variant has been discovered in the Netherlands by researchers at Oxford University, who say the variant is highly infectious and more damaging than other HIV strains and can put individuals at risk of developing AIDS “much more rapidly.”

HIV is a virus that attacks the body’s immune system, which can but not always lead to AIDS if it isn’t treated. The World Health Organization (WHO) has estimated that between 30.2 and 45.1 million people were living with HIV at the end of 2020, with more than two-thirds of them (25.4 million) in the WHO African Region.

The newly discovered variant, named “VB” for virulent subtype B, shows significant differences compared with other HIV variants. Specifically, prior to antiretroviral treatment, people with the VB variant had a viral load (the level of virus in the blood) between 3.5 and 5.5 times higher. They also show a higher risk of transmitting the virus to others.

The rate of CD4 cell decline—considered the marker of immune system damage by HIV—was twice as fast in people with the VB variant, which puts them at risk of developing AIDS “much more rapidly,” according to a statement from Oxford.

“Before this study, the genetics of the HIV virus were known to be relevant for virulence, implying that the evolution of a new variant could change its impact on health. Discovery of the VB variant demonstrated this, providing a rare example of the risk posed by viral virulence evolution,” lead author Chris Wymant said in the statement.

Fortunately, those with the VB variant responded similarly to antiretroviral treatment, the standard treatment for HIV, and had survival rates similar to people with other HIV variants.

Citing how the newly discovered variant can damage the immune system more rapidly, researchers said it’s “critical” that people at higher risk of contracting HIV have access to frequent testing in order to get diagnosed early and start treatment as soon as possible.

Early detection and treatment “limits the amount of time HIV can damage an individual’s immune system and jeopardize their health,” senior author Christophe Fraser said in the statement.

“It also ensures that HIV is suppressed as quickly as possible, which prevents transmission to other individuals,” Fraser said.

Without treatment, people with the VB variant could progress to AIDS within two to three years of their initial HIV diagnosis, compared to an average of six to seven years after diagnosis with other HIV variants.

The peer-reviewed study was published in the journal Science on Feb. 3.

Scientists noted that they can’t deduce any single genetic cause for the VB variant, which has many mutations spread throughout the genome.

The variant is estimated to have arisen in the late 1980s to 1990s. Researchers were alerted to the VB variant from another ongoing study, the BEEHIVE project, which collects test samples from across Europe and Uganda.

They found that 17 of the HIV-positive people in the BEEHIVE study had a “distinct subtype-B viral variant” with viral loads that were “highly elevated” in the six- to 24-month period after a person had a positive test in the early stage of their infection. Of the 17 people, 15 came from the Netherlands.

From there, researchers analyzed data from a cohort of 6,706 HIV-positive people in the Netherlands, from which they found 92 more people infected with the viral variant, bringing the total number of people confirmed to have the VB variant to 109.

The “first sampled VB individual” was diagnosed with HIV in 1992, researchers wrote.

After analyzing the patterns of genetic variation among the samples, scientists estimated that the VB variant first arose in the late 1980s or early 1990s in the Netherlands, after which it spread faster compared to other variants in the 2000s, although the spread has been declining since about 2010.

“The research team believe that the VB variant arose in spite of widespread treatment in the Netherlands, not because of it, since effective treatment can suppress transmission,” the Oxford statement reads.