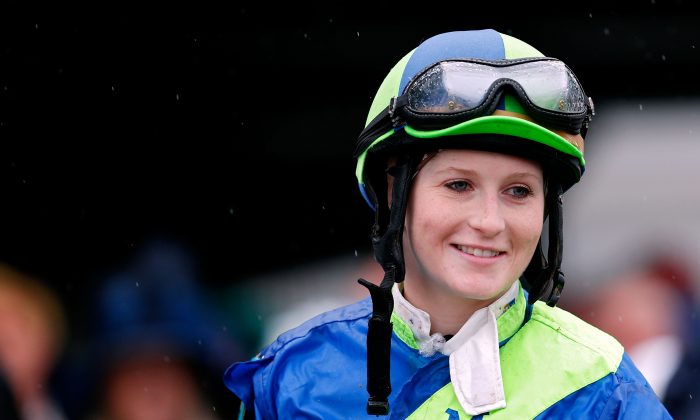 Rosie Napravnik looks on after winning a race prior to the 139th running of the Kentucky Derby at Churchill Downs on May 4, 2013 in Louisville, Kentucky. (Rob Carr/Getty Images)
Sports

Highlights of the Kentucky Derby

This year’s running of the 139th Kentucky Derby at the iconic Churchill Downs racetrack was perhaps the most exciting in 39 years. The Derby with it’s $2 million purse is one of the world’s premier challenges in horse racing. This year brought the largest crowd in the history of the race, some 151,615 attendees came to watch and experience the mile and a quarter race. The excitement was generated not only by the race itself but by the large number of unusual ‘back stories’ involved which lead up to and culminated during the race.

Adding to the draw of this year’s first ‘Jewel’ in the Triple Crown Legacy were some very interesting things to watch for. One was Rosie Napravnik, a longtime horse woman, who previously finished in 9th place at the 2011 Kentucky Derby aboard Pants on Fire, which at that time was the best finish for a woman in the Derby’s history. This time Napravnik earned another place in history when she finished in 5th place aboard Mylute.

Kevin Krigger, the only African-Amercian jockey in the race, was also the first one to be in the Kentucky Derby since 2000. Krigger is an excellent jockey, period. He captured the Santa Anita Derby on Goldencents, which gave him his first Grade I victory and an the invitation to ride Goldencents on one of horse racing’s grandest stages, the Kentucky Derby of course. An early blistering speed set by Palace Malice and a very sloppy track may have contributed to Goldencents being out of the money this time.

Mixing these factors with the natural high energy of the event provided a potent brew for the racing aficionados.

Heavy rains made for a very sloppy racetrack to run on for the 20-horse field of starters. As the field approached the starting gate the favorite horse, Revolutionary, suddenly had a co-favorite in the colt Orb, trained by McGaughey. Some horses don’t like to run in mud, leading to plenty of speculation about the field.

In a breathtaking break from the gate, early speed went to Aiken’s Palace Malice, who set a blistering early pace. He led the pack until they entered the final stretch, but then dropped back to finish in 12th place.

Orb was well back in the pack at the start, running in 15th place before jockey Joel Rosario asked him to begin a drive for the finish. It was with skill and an excellent response from Orb that they started to pass by the pack. Orb had to go to the outside of the pack in order to stretch out and run get to the front.

Running to the outside of the pack of course means that a horse has to cover more ground then the runners who are closer to the inside rail, and requires a greater effort for the horse. Orb never hesitated, passing the pack with a determined focus by jockey and horse. Orb won by 2 1/2 lengths, in a time of 2:02.89, on a sloppy track. Coming in second place was longshot Golden Soul, with Revolutionary in third place followed by Normandy Invasion and Mylute.

McGaughey, had his first Derby win, as did Orb’s jockey, Joel Rosario. Talking with USA Today, McGaughey said, “It means everything to me. I’ve always dreamed of this day and it finally came,” McGaughey said. “I’m thrilled for the people who put in so much time on this horse, and of course I’m thrilled for me.”

Rosario, who is considered the hottest jockey in North America in recent months added , “It’s awesome. I won the $10 million Dubai World Cup, and to win the Derby now it’s like a dream. I’m so happy for Shug McGaughey.”

When interviewed by broadcasters after the race Rosario called his ride “perfect”.

The winner’s share of the purse was worth $1,414,800 and improved Orb’s career earnings to $2,335,850 with a record of five wins in eight races. Orb is owned by the Phipps Stable and Stuart Janney.

With this year’s field of horses showing so many excellent starters it leads to the question which always arises at the beginning of the Triple Crown journey….will this be year that produces a new Triple Crown winner? 1978 was when we had our last Triple Crown winner Affirmed. The field overall seems more likely to support that possibility this year, but fate always deals the winning hand.

As always the spirit of Secretariat is in the minds and hearts of many race goers. His 1973 track records have stood the test of time for an unusually long time with no horse being able to break the 2 minute mark in the Kentucky Derby. He holds the record for the fastest Kentucky Derby ever at 1:59.40, this is also the track record for the mile and a quarter at Churchill Downs. He went on to win the Triple Crown and was named Horse of the Year as well as Champion 3-year-old for 1973. This year is the 40th anniversary of Secretariat’s Kentucky Derby run.