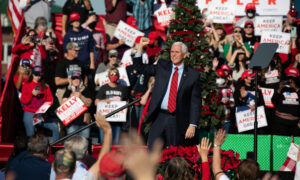 NTD host Cindy Drukier and Joshua Philipp from The Epoch Times spoke to some key people at the rally in
Washington, D.C. on Dec. 12. Here are some of the highlights.

“If we let this go, this may be the last free election that we have. And we certainly lose our republic. And that’s I think what everybody is mostly concerned about. And when you think about it, what we’re fighting right now is probably the greatest battle that we will ever fight in this country, save the Revolutionary War, because we are fighting for liberty we’re fighting for freedom. It is something that God has blessed this nation with. The founding fathers were influenced by God bless America. But so that’s what’s so exciting about this is that we understand this is the battle for our liberties and our freedom. And you know, our founding fathers, John Adams said you will never know the risks we took, the sacrifices we made to give you this freedom, handle it well, and we need to handle it well. Make good use of it, he said. And we need to make good use of our freedom.”

Frank Gaffney, from the Committee on the Present Danger:

“We have enemies without and within. And I think what we’ve learned in the course of this election, watching what the Chinese Communist Party the CCP has been doing, to interfere with our election to make it come out the way they wanted, which was clearly in favor of a man they’ve deeply compromised, Joe Biden, in the furtherance of their efforts to take us down. So our objective I think, now must be to designate the Chinese Communist Party, as what it is, which is a transnational criminal organization, to push back against what it is doing to its own people, to the people it has enslaved inside the territory they call China, in Tibet, in Southern Mongolia, in East Turkistan, in Hong Kong, and that that they aspire to conquer now with their Belt and Road initiative, all the other reaches of the world. And most especially, we need to assure that the Marxist efforts to take over our country with obvious and direct help from the Chinese Communist Party must be defeated.”

“I expect to hear something any day. I think what’s happening is we have a lot of political butt-covering. People don’t want to know the truth, they don’t want to know that our election has been managed by people who were either indifferent or incompetent. They didn’t do their due diligence, or at least they did their due diligence to the extent that they were comfortable with, that’s not acceptable.”

“Well my thoughts are that the government needs to be responsive in answering these questions, I like to remind folks that the founding fathers did not oppose monarchy, they opposed the abuse and the tyranny of government and King George, and so, in very much the same question, we’re asking ourselves: Is the federal government, is the Supreme Court, that won’t take a case brought by the states against the other states, is that legitimate? Is that what agree to, is that a part of our social contract, or do we need to establish something different. We’re all for America, but we need to ask, are American politicians for Americans?”