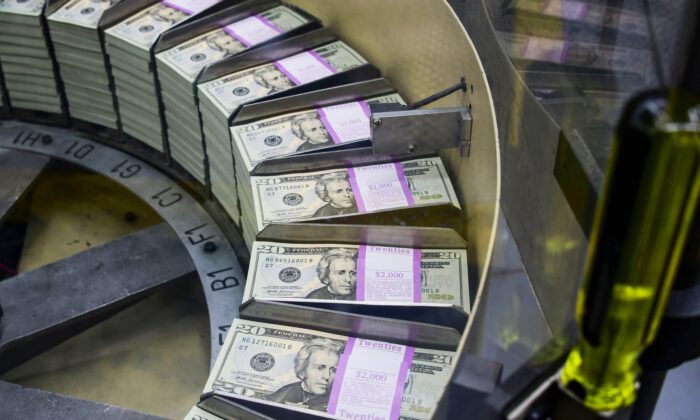 Packs of freshly printed $20 bills are processed for bundling and packaging at the U.S. Treasury's Bureau of Engraving and Printing in Washington on July 20, 2018. (Eva Hambach AFP via Getty Images)
Economy

With the U.S. annual inflation rate at a four-decade high of 8.6 percent, the Federal Reserve is accelerating its monetary policy tightening by aggressively raising interest rates. The Federal Open Market Committee (FOMC) pulled the trigger on a 75-basis-point rate increase on June 15 and the U.S. rate futures market is penciling in another three-quarter-point boost at next month’s policy meeting.

But now that the central bank is moving on from a near-zero benchmark federal funds rate, there are growing concerns about how much this tightening cycle will affect the national debt crisis.

The U.S. national debt is above $30 trillion, while the federal government makes approximately $305 billion per year in interest payments. President Joe Biden’s 2023 budget forecasts that net interest payments will top $1 trillion by 2031, but the administration’s estimates are based on subdued interest rate projections over the next decade (pdf).

According to the Congressional Budget Office (CBO), interest costs are forecast to reach $1.2 trillion in 2032, totaling more than $8 trillion over the next decade. Interest payments will represent a record 3.3 percent of gross domestic product (GDP), the highest percentage since 1991 when it was 3.2 percent.

The non-partisan budget watchdog’s figures are based on an average 0.9 percent rate on three-month Treasury notes in the calendar year 2022 and then rising to 2.3 percent by 2032. The CBO also prognosticates the interest rate on 10-year Treasurys would average 2.4 percent this year and then 3.8 percent by 2032.

In a new analysis from the Committee for a Responsible Federal Budget (CRFB), experts assessed what net interest costs would be if rates were to go higher.

Under current law, the national debt is expected to skyrocket to an all-time high of 110 percent of GDP by 2032. If rates were to climb 50 basis points higher, debt would spike to 114 percent of GDP. A 100- or 200-basis-point increase would elevate the debt-to-GDP ratio to 118 or 126 percent, respectively.

“As the national debt continues to rise and the interest rates on Treasury bills continue their upward trajectory, the federal government’s interest payments on its debt are projected to grow rapidly through FY 2032,” wrote Jordan Haring, a CRFB policy analyst, in the report. “As a result, net interest will comprise a larger and larger share of federal spending, increasing deficits and crowding out other important priorities.

“Policymakers should work to reduce budget deficits and put debt on a sustainable path through a combination of entitlement reforms, spending reductions, and revenue increases.”

Although some policymakers believe that higher inflation is good for the budget in the short-term, it will lead to medium- and long-term consequences, says Marc Goldwein, senior vice president and senior policy director at CRFB.

“There is a very real risk if the inflation is sustained, but temporary, and the interest rate increases to fight them are sustained and permanent, it’s going to be very painful for the federal budget,” Goldwein told The Epoch Times.

There are solutions for the federal government to prevent intense fiscal and inflationary pressures, he said.

Some of the measures would include avoiding any increase in the budget deficit, halting deficit-financed spending, and ensuring that efforts such as canceling the $1.5 trillion student loan debt don’t happen. But this could be challenging for politicians, particularly during election years.

“While giving away stuff is politically popular, I think increasingly the American public understand that more deficit financing is going to worsen the inflation situation,” Goldwein said.

Biden has been telling the public that his administration slashed the budget deficit, recently saying that it’s poised to have “the biggest decline in a single year ever in American history.”

Experts note that this is misleading and inaccurate for a few reasons. The first is that much of the COVID-related stimulus, relief, and emergency spending has expired. The second is that the national debt is still on track to increase by $1 trillion.

“Congress has repeatedly added to the national debt as a way to avoid making tough choices. The debt now stands at $30.4 trillion, or more than $230,000 per U.S. household,” wrote David Ditch, a policy analyst at the Grover M. Herman Center for the Federal Budget at The Heritage Foundation.

“We see the consequences of all that deficit spending in the form of the ongoing inflation crisis—and the long-term consequences of our unsustainable debt could be even worse.”

Last month, the CBO forecast that the U.S. deficit would slide to $1 trillion this year and then start surging in 2024, adding that “if lawmakers amended current laws to maintain certain policies now in place, even larger increases in debt would ensue.”