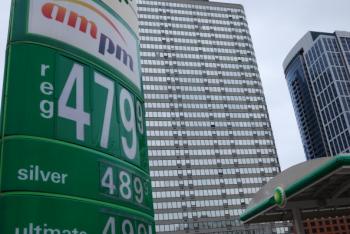 A BP station in downtown Chicago charges $4.79 a gallon for regular gas on May 3, 2011. (Mira Oberman/AFP/Getty Images)
Business & Economy

Soaring gasoline and food prices helped drive up the U.S. Consumer Price Index, an indicator of inflation, by four-tenths of a percent in April, the Labor Department said on Friday.

April’s CPI data capped off a 12-month time period of the most rampant inflation since October 2008, the Labor Department release said. The past year saw the CPI, an index that measures the price increases of a select basket of basic goods, rise by a seasonally-unadjusted 3.2 percent.

Energy costs rose by 2.2 percent last month. Over the past 12 months, gas prices have risen by 33.1 percent and the overall energy index has climbed by 19 percent.

Even though U.S. inflation reached its highest peak in two and a half years, price rises slowed significantly in April, marking positive news for economists and analysts who feared runaway inflation might put a damper on the economic recovery.