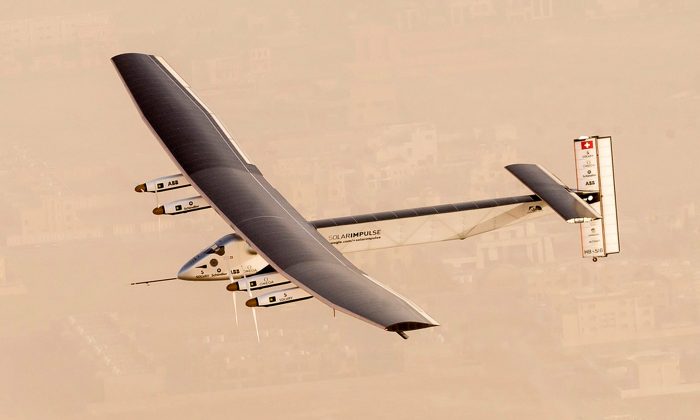 In this handout image supplied by Jean Revillard, Solar Impulse 2, a solar-powered airplane, takes flight as it begins its historic round-the-world journey from Al Bateen Airport, on March 09, 2015 from Abu Dhabi, UAE. The 35,000km journey is expected to last five months and is piloted by Andre Borschberg and Bertrand Piccard of Switzerland. The Solar Impulse 2 is equipped with 17,000 solar cells, has a wingspan of 72 metres, and yet weighs just over 2 tonnes. (Jean Revillard via Getty Images)
International

After an eight-day postponement, Solar Impulse 2, a solar-powered plane piloted by Andre Borschberg, completed its first leg of an around-the-world journey early on Monday, according to a CNN report.

The March 1 departure had been postponed due to strong dust storms that created hazy conditions.

“We have had a lot of sandstorms in Abu Dhabi, and also a lot of wind, sea breezes, higher than the limit,” said the team’s meteorologist Luc Truellemas in an interview posted on Twitter and YouTube.

Andre has worked on this airplane … for 12 years.
— Bertand Piccard, fellow pilot

Fueled only by the sun’s rays, the plane took off from Abu Dhabi in the United Arab Emirates—Borschberg expected to land in Oman within 12 hours.

Yet, high winds delayed his landing on Monday keeping Borschberg hovering in a holding pattern above Muscat. After safely landing, Borschberg said he was “extremely happy” and “looking forward to the rest of [the] adventure.”

The entire 35,000-kilometer (approximately 21,750 mile) journey around the world is expected to take five months, making stops in India, Myanmar, China, and the United States.

Borschberg shares the tiny 3.8-square meter single-seater cockpit with fellow pilot Bertrand Piccard, who will help in manning the controls of the plane. Some of the later stops can take up to five or six days and nights.

Bertrand deserves to fly the last leg, and to make the arrival in Abu Dhabi, completing the vision he created 15 years ago.
— Andre Borschberg, fellow pilot

Despite the lack of space, the tiny cockpit is packed with enough food and water for a week. It also holds a parachute, life raft, and oxygen bottles for emergency situations.

The experienced solar plane flyers piloted a similar plane together across the United States in 2013. Based on that, Borschberg and Piccard already decided who will control the plane when: Piccard will take on the five-day, five-night leg across the Pacific, and Borschberg will face the Atlantic.

On Sunday, the two joked about tossing a coin to see who would fly first before tearfully revealing they had already decided.

“Andre has worked on this airplane … for 12 years, from the feasibility study until now; it is more than natural that he takes the first step,” said Piccard.

Borschberg added, “Bertrand deserves to fly the last leg, and to make the arrival in Abu Dhabi, completing the vision he created 15 years ago.”

Piccard was a member of the first team to circumnavigate the globe nonstop in a balloon in 1999, and Borschberg is a former fighter pilot.