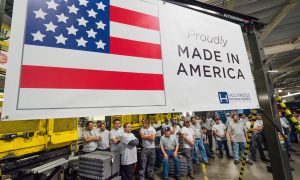 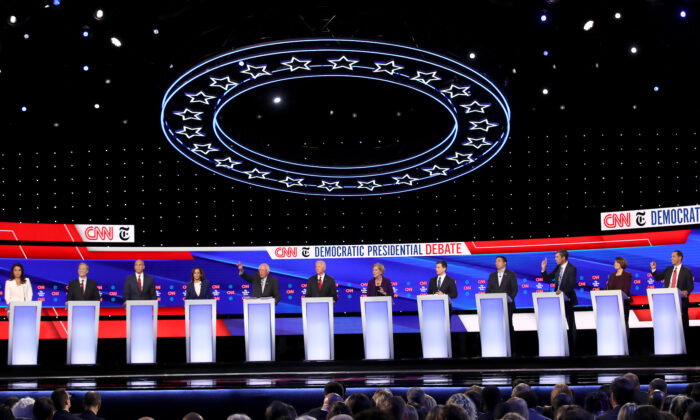 High Time to Examine Economic Positions of the 2020 Democrat Field in Election that ‘Hinges on Economy:’ Expert

American voters are being urged to look past personality and soberly evaluate the economic policies put forward by the 2020 Democrat presidential candidates ahead of next year’s high-stakes election.

Stanford Professor Michael Boskin argued in an op-ed earlier this year that as the election gets closer, people should look beyond slogans and catchphrases to avoid buyer’s remorse. The one-time adviser to Ronald Reagan said it’s high time voters put everyone seeking to occupy the White House through a “rigorous analysis” on their “sharply divergent economic policies.”

“The stakes are high and the outcome will reverberate across the world in a number of spheres, not least the economy,” Boskin wrote in an op-ed for the British newspaper The Guardian.

President Donald Trump, meanwhile, said of next year’s election that “at stake in this fight is the survival of American democracy itself.” He has cast the election as a battle between freedom and tradition on the one hand, and tyranny and socialism on the other.

“Here, in the United States, we are alarmed by new calls to adopt socialism in our country. … Tonight, we renew our resolve that America will never be a socialist country,” he said during the State of the Union address. Later, during an address at the United Nations, Trump called socialism a “destroyer of societies.”

“One of the most serious challenges our countries face is the specter of socialism,” Trump said. “It’s the wrecker of nations and the destroyer of societies.”

The president believes his fight is against a risky socialist experiment that would throw his roaring Trumponomics-fueled economy into a tailspin. More fundamentally, he views 2020 as not just a fight for economic survival, but for the soul of the nation.

His chief political rival, former Vice President Joe Biden, has also resorted to tough rhetoric. Biden has claimed that reelecting Trump “will fundamentally change the character of this country for generations.”

“We are in the battle for the soul of this nation,” Biden said, announcing his bid in April. “If we give Donald Trump eight years in the White House he will forever and fundamentally alter the character of this nation. Who we are. And I cannot stand by and watch that happen.”

Economically, a successful Democratic challenge to Trump would most likely see a figure in the Oval Office who backs some form of the expensive and expansive Green New Deal (GND). It is both the Democrats’ signature vision for a zero-emissions future and their concept for fueling economic growth and providing jobs.

Most of the 2020 Democrat candidates have expressed support for the GND, and some, like Biden and his “Clean Energy Revolution,” have built their economic platforms on its foundation.

Socialist Sen. Bernie Sanders (I-Vt.) co-sponsored the GND when it was introduced as a resolution in Congress by Rep. Alexandria Ocasio-Cortez (D-N.Y.) and Sen. Ed Markey (D-Mass.). Sanders has since unveiled his own $16 trillion version of the GND, claiming that not only would it “create 20 million jobs needed to solve the climate crisis” but that it would somehow even pay for itself.

“The benefits are enormous,” Sanders claims on his campaign website. “By taking bold and decisive action, we will save $2.9 trillion over 10 years, $21 trillion over 30 years, and $70.4 trillion over 80 years.”

“But it has another implication, one of special importance to socialists,” wrote Megan Day of the far-left Jacobin Magazine, which bills itself as “a leading voice of the American left, offering socialist perspectives on politics, economics, and culture.” Day said the GND’s jobs guarantee component “is one of the most important and exciting offerings of the Green New Deal,” adding that if successfully implemented, it would be “a chance to massively increase the power of working people. They can use that power to wrest more control from the capitalist class.”

Boskin additionally cautioned that some Democrats are flirting with “even more radical plans” that are inspired by the GND but go far beyond.

“A Democratic president could also be expected to tighten financial regulation, and potentially even introduce radical changes to corporate law,” he wrote. An example is Sen. Elizabeth Warren’s (D-Mass.) plan to “democratize the workplace” by letting employees appoint corporate board members.

“It also means transforming large American companies by letting their workers elect at least 40 percent of the company’s board members to give them a powerful voice in decisions about wages and outsourcing,” Warren said on her campaign website.

Warren, who said she’s “proud to be an original supporter of the Green New Deal,” initially proposed her version as a “historic $2 trillion investment in researching, developing, and manufacturing clean energy technology here in America.” She later made it an even $3 trillion.

“Today, I’m announcing I’ll commit an additional $1 trillion over 10 years—fully paid for by reversing Trump’s tax cuts for the wealthiest individuals and giant corporations—to match Governor Inslee’s commitment, and to subsidize the economic transition to clean and renewable electricity, zero emission vehicles, and green products for commercial and residential buildings.”

Warren’s signature Ultra-Millionaire Tax would take in 2 cents on every dollar of assets above $50 million and 3 percent on fortunes worth $1 billion and more.

“When you’re above $50m … it’s not only about the real estate. It’s about your stock portfolio, the diamonds, the Rembrandt, and the yacht,” Warren said of the Ultra-Millionaire Tax.

Forbes argued it will face a Supreme Court challenge over its alleged status as an unconstitutional “direct tax.”

“I’m dying to know whether her headlining tax proposal—the unconventional ‘wealth tax’ that she claims would generate $2.75 trillion dollars over 10 years from the richest 75,000 families in America—would violate the U.S. Constitution,” wrote Tony Nitti, Senior Contributor for Forbes and a licensed CPA, adding, “the entire tax may violate Article 1, Section 9, Clause 4.”

Spurning “traditional” fossil fuels and spurring growth in “progressive” carbon-free sources of energy, the GND has been conceived as a multi-aim scheme that includes job guarantees, affordable housing, and universal health care. On the other side of the equation, the massive spending it would entail is seen as the engine of a massive economic stimulus push, but with the government, rather than the free market, behind the wheel.

British economist Ann Pettifor, author of “The Case for the Green New Deal” and adviser to Congresswoman Alexandria Ocasio-Cortez, admitted that the bold aims of the GND are impossible under free-market conditions. In her book, she argues people should “get real” and recognize that bankers will never “finance a massive climate stabilization project on terms that are acceptable and sustainable.” Instead, she prescribes increasing state control of the economy and restricting people’s ability to move their capital freely.

According to Pettifor’s own conclusions, in order to work as it’s supposed to, the GND—and by logical extension the plans it has inspired—requires ringfencing capital so it doesn’t flee whatever “socialist utopia” is envisaged at its culmination. Imposing financial controls is a policy undertaken by China, for example, which has closed its capital account to prevent capital flight that would, many argue, cause the communist regime to collapse.

Trump, in his criticism of socialist ideas, has seized on their inevitably tyrannical nature. “Socialism is a sad and discredited ideology rooted in the total ignorance of history and human nature, which is why socialism, eventually, must always give rise to tyranny, which it does,” Trump said in remarks to the Venezuelan American community, in the context of the collapse of the socialist experiment in Venezuela.

GND critics, including Trump and the Republicans, denounce the scheme as costly, radical, and socialist.

Boskin called “the $10 trillion Green New Deal, an economically, scientifically, and numerically illiterate program.” The American Action Forum, led by former Director of the Congressional Budget Office Douglas Holtz-Eakin, estimated the plan could cost between $51–$93 trillion over the next decade.

Jonathan Ford, City Editor for the Financial Times, wrote that “it is easy to pick holes in the impracticality of the GND, especially the idea of moving to a zero-emission power system in just a decade.”

“Simply backing up an electricity network that was wholly powered by renewables would presently be ruinous. Building the necessary battery storage to supply a week’s power in Britain would cost £1 trillion, according to the French utility EDF.”

Paul Driessen, a senior policy advisor for the Committee For A Constructive Tomorrow (CFACT) and author of “Eco-Imperialism: Green Power Black Death,” argues that Biden’s job creation claims within his GND-based “Clean Energy Revolution” scheme will be foiled and offset many times over by job losses in the traditional energy production sector.

“As Germany, Britain, Spain, Australia, and other countries have shown, that kind of energy eliminates 3-4 times more jobs than it creates—especially in factories and assembly lines, which cannot operate with repeated electricity interruptions.”

Biden said he would pay for his GND-based Clean Energy Revolution scheme by rolling back Trump’s tax cuts, and “reducing incentives for tax havens, evasion, and outsourcing, ensuring corporations pay their fair share, closing other loopholes in our tax code that reward wealth not work, and ending subsidies for fossil fuels.”

In an article titled “Dousing Candidates and Green New Dealers with Buckets of Icy Cold Reality,” Driessen wrote of the so-called “climate crisis” driving the Democratic candidates’ GND-based proposals: “They need to be doused with a few buckets of icy cold reality. The first bucket: We do not face a climate emergency. Computer models certainly predict all kinds of catastrophes. But both the models and the increasingly hysterical assertions of planetary chaos are completely out of touch with reality.”

“The second, even colder bucket of reality: Wind and sunshine may be free, renewable, sustainable and eco-friendly. But the technologies, lands, and raw materials required to harness this widely dispersed, intermittent, weather-dependent energy to benefit humanity absolutely are not. In fact, they cause far more environmental damage than any of the fossil fuel energy sources they would supposedly replace.”

By contrast, Trump’s economic policies have been forged in the spirit of Reaganomics—market-led not government-driven and based on tax cuts and deregulation.

Lawrence Kudlow, former financial analyst and current head of the National Economic Council under Trump, characterized the president’s position on the economy in the foreword to the book “Trumponomics,” writing that, “Trump says we can get to 3, 4, or even 5 percent growth through tax reduction, deregulation, American energy production, and fairer trade deals, and he is exactly right.”

“He wanted tax cuts. He wanted to deregulate, he wanted to get the government out of the way,” is how Kudlow explained the rationale behind the president’s economic policies.