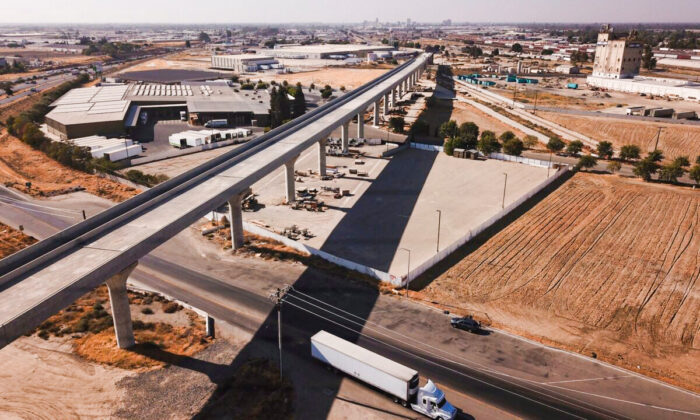 In this aerial image looking towards downtown Fresno, the Cedar viaduct stands during construction of a high-speed rail project through the Central Valley in Fresno, Calif., on Aug. 26, 2021. (Patrick T. Fallon/AFP via Getty Images)
Viewpoints

When the $10 billion high-speed rail bond was on the ballot in 2008 and being pushed by Gov. Arnold Schwarzenegger as part of his environmentalist personal makeover, I made two predictions: 1. It really existed only to dole out billions to private contractors and construction-union members. 2. It never would get built, except possibly in a highly truncated form.

That’s exactly what has happened, as detailed in a new fact sheet from the California Senate Republican Caucus, which summarizes this boondoggle of boondoggles. I’ll add some links to further studies for those interested.

1. Proposition 1A was supposed to cost a total of $33 billion when completed. But the current estimate is $105 billion, according to the 2022 Draft Business Plan of the California High-Speed Rail Authority.

2. The system was promised to be entirely completed by 2020—already two years ago. But the CHSRA earlier this year announced the first leg of the supposed system, from Merced to Bakersfield, might be completed by 2029.

3. The system was sold as transporting passengers in 2.5 hours between San Francisco and Los Angeles. There’s no timetable, and no money, for this ever to happen.

4. The system was promised to deliver “a clean, efficient 220 mph transportation system.” It’s not anywhere near doing that, despite just receiving another $4.2 billion in the state budget for fiscal year 2022-23, which began on July 1.

7. The project was supposed to reduce greenhouse gas emissions by getting people out of their gas-guzzling cars. But in 2020 Gov. Gavin Newsom issued an executive order banning the sales of new gas-powered cars by 2035.

Let me add a couple of other points. Despite California being proclaimed a “nation state” by Newsom and others, it’s really just a subsection of the United States. That’s why the state sought, and achieved, a reversal of President Trump’s cancellation of federal funds for the HSR. Last year, President Biden approved $929 million for it.

Here are the population densities for the United States in comparison with some other countries touted as having such systems—all of them, by the way, heavily subsidized by their taxpayers:

Note America’s density is one quarter that of China. Perhaps when America’s population rises to 1.4 billion, high-speed rail might become feasible.

Moreover, all those countries have strings of cities close to one another. California’s geography includes two large population centers, Southern California and the Bay Area, with a large area in between that’s lightly populated. There’s already a technology that links those areas, not in 2.5 hours, but in about one hour. It even flies. It’s called airplanes.

It’s true the post-covid airline industry is suffering numerous problems. Travel Pulse reported Aug. 22, “Bad weather has only fueled the fire already started because of a pilot and staffing shortage, and the last two days have seen tens of thousands of flight issues—8,049 delays and 900 cancellations into and out of the United States on Sunday, August 21, according to the aviation tracking service FlightAware, and 5,295 flight delays and 879 cancellations today, Monday, August 22.”

That came after Transportation Secretary Pete Buttigieg criticized the industry again. Although much of the problem stems from the inflation, especially in jet fuel prices, caused by the Biden administration itself.

In any case, California’s High-Speed Rail isn’t the solution to airline problems, which eventually will get ironed out. Even if the rail was built, it would suffer the same problems of delays as the existing rail system, Amtrak. ABC News in Richmond, Va., reported July 31, “‘Hurry up and wait’: Amtrak passengers deal with heat as another reason for travel delays.”

Amtrak’s website warned: “High temperatures may require trains to operate at lower speeds. Please plan ahead as delays are possible.”

It gets hot in California, too. So that would happen here.

Meanwhile, the one thing that’s moving at high speed in California is the money into this boondoggle of boondoggles.