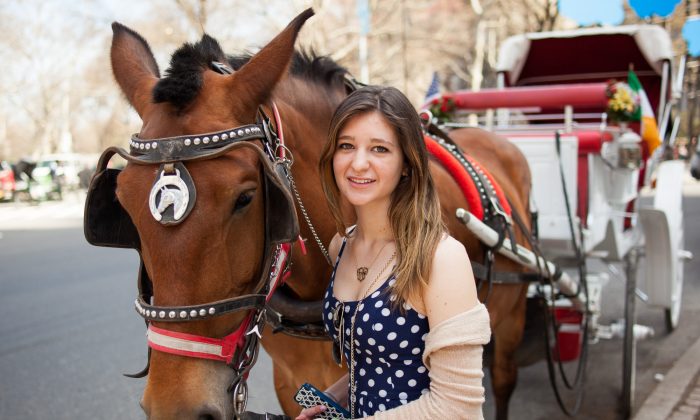 High school sophomore opposes horse carriage ban with a website, research, and the help of her friends
By Petr Svab

NEW YORK—The typical image of an American high schooler carries some lackluster stereotypes: bored out of their minds, focused on social media tools like Instagram, obsessed with gadgets.

Alexandra Summa, a sophomore at Eleanor Roosevelt High School, has stepped outside the box. She took on a civic issue, and one that sets the city presses on fire, no less—the horse-carriage ban.

She grew up on the Upper East Side and remembers nostalgic rides in the carriages. When she learned Mayor Bill de Blasio wants to ban them, she took the opposing stance.

De Blasio announced during his campaign he would switch the horses for vintage-looking electric cars. He has since postponed the move until the end of the year.

Rather than ranting, Alexandra turned savvy. She’s already put in three years interning for former City Council member Jessica Lappin. “I learned the power that one person has in this world,” she said. During a March 13 family dinner an idea came up to launch an online initiative against the ban.

First, her father took her to visit the Clinton Park Stable on West 52nd Street, where 200 draft horses are stabled. Finding the place welcoming, clean, and smelling better than the barns “at summer camp in Pennsylvania,” she turned to do more research online. Finally, with $450 from her father, she set up her website—IconicNYC.org.

The website gathered some 800 page views on the first day and about 10,000 since. She was also able to gather nearly a dozen friends to help her. Her story appeared in the online press and she appeared on a Fox TV morning show 10 days ago.

Now she’s sending letters to 26 City Council members who haven’t taken a position on the issue yet.

Summa said she didn’t try to reach out to groups that support the ban, such as People for the Ethical Treatment of Animals (PETA) or NYClass, a nonprofit founded in 2008 to stop the horse carriage industry in the city.

Soon enough, the other side reached out to her and posted comments on her website.

Her response was to keep the dialogue open. “We at IconicNYC.org welcome and ask that people become informed on the issues. We will therefore not delete posts unless they use profane or obscene language in some manner,” she responded in a discussion post.

“I don’t support it, but I respect it,” she said to explain her stance on differing opinions.

On the other hand, her efforts earned her a lot of gratitude. She visits Central Park almost every weekend, not just to relax, but to talk to the carriage drivers and learn more about the issue. Drivers already know her and show their appreciation.

“Thank you so much for what you are doing for us. This is my family’s whole life. We love our horses and would never want to be without them. Thank you from the bottom of our hearts!” commented Abby Marinelli-Rodden, who works at the Clinton Park Stable.

However the dispute ends up, IconicNYC is here to stay. “It’s for preservation of all things iconic to New York City,” she said. She is already looking into issues like cyclists’ rights and preserving the Unisphere in Flushing Meadows Corona Park.

She may not be certain about her college plans yet, but she would like to keep community engagement in her life, including keeping the option open to run for office one day. “It’s a pretty crazy idea now,” Summa said. “But, it’s possible.”