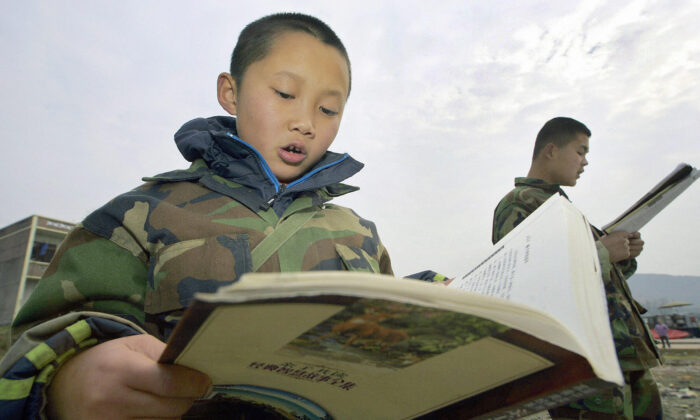 Students read textbooks at the temporary campus of the "Walking School" of Xu Xiangyang Education and Training Group, 22 Dec., 2005, on the outskirts of Chengdu. (Liu Jin/AFP via Getty Images)
Chinese Regime

A high school in China recently published a language tutorial containing a story based on the theme “killing the wife for the Chinese Communist Revolution.” The extremely distorted values espoused in the lesson sparked public shock.

The April 15 issue of the New Curriculum Review, a weekly magazine that provides Chinese language tutoring for high school students, contained a story that took place in the run up to 1949, the year the Chinese Communist Party (CCP) successfully seized power in China.

The story, written as a first-person narrative, is about the author’s grandfather who was working for the CCP in charge of raising military funds. One day, his grandmother took some gold bars from the funds, and so the grandfather said, “I have no option but to shoot my wife to death.” After killing his wife, the grandfather didn’t remarry and he kept his dead wife’s red bridal veil with him for the rest of his life.

It is difficult to verify the authenticity of the story used in the article. Titled “Red Bridal Veil,” in reference to the tradition of a bride covering her face with red silk on the day she gets married, the romantic title likely insinuates that the grandfather still loved the grandmother but killed her for what he believed to be an ideologically righteous cause.

Beneath the story, the editor of the state-backed publication commented, “Anyone who reads this story cannot help but be moved by the noble character and love of family and country” of this “revolutionary man” who personally executed his wife.

However, instead of resonating with the public, as the publication expected, people posted their outrage online and condemned the education authorities for fabricating such an appalling story and indoctrinating minors with inhumane ideas.

A reader’s comment posted by China News said of the story, “I felt a chill through my bones, I wonder if anyone was scared by this ‘noble character.’ The grandmother in the story cannot be seen as an evil person; yet she was executed by her husband in the name of justice. Where is the dignity and value of life? Is there really such perverse love in the world? It’s ridiculous!”

China current affairs commentator Yang Guiyuan told The Epoch Times that the CCP has advocated “righteousness to destroy relatives” since it usurped power. This distorted value reached its peak during China’s Cultural Revolution.

According to Yang, the CCP encouraged husbands and wives, parents and children, and teachers and students to expose and spy on each other, under the pretense of “demanding a politically correct progress.”

“This is actually a complete destruction of human relationships and a distortion of human nature,” Yang said.

As for Party nature, The Epoch Times editorial series “Nine Commentaries on the Communist Party” says that the Chinese Communist Party’s nature always existed and was apart from universal humanity. Human nature might be relative and changeable, but Party nature is absolute and not allowed to be questioned or challenged.

In 2016, a court in Neixiang county, Henan Province, hung up a very long banner that said “Take Party nature into consideration regardless of humanity,” reported Radio Free Asia on May 17, 2016.

In the face of the surge of skepticism, President of Henan Neixiang Court, Cheng Yanzhou, responded, saying, Party nature should be the priority, especially when it conflicts with human nature. But he didn’t mention under what circumstances human nature takes precedence.

Hong Kong veteran publisher Yan Chun-hook said on his Facebook page on Nov. 6, 2021, that humanity has been shaped and established over thousands of years of social development with love and kindness, the mind and soul of the individual, and all social ethics and basic moral conduct are the cornerstones of normal society.

“In a society ruled by the CCP, crimes against humanity can be committed in broad daylight,” Yan added, citing, that most Chinese people accepted inadvertent brainwashing by the regime and lost their humanity. Thus, they can easily act as a useful tool for the CCP to further suppress the Chinese people.

Created in 2006, the New Curriculum Review is the sole journal that supports high school textbooks under the guidance of China’s Ministry of Education for basic education curriculum reform, targeting teachers and students nationwide.