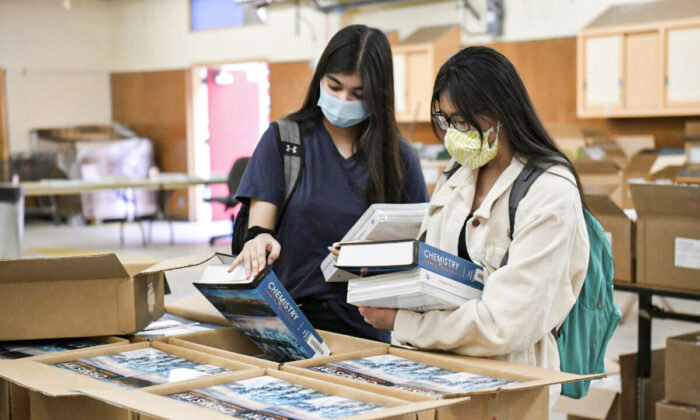 SANTA CLARA, Calif.—Some of California’s largest school districts are dropping D and F grades for high school students. While the hope is that this will help students reengage in school after distance learning and boost their chances of acceptance into the state’s public colleges, some educators find lowering the bar both offensive and detrimental.

School districts in San Diego, Los Angeles, Oakland, and Sacramento are among several districts that are eliminating grades below a C beginning this school year.

“Our hope is that students begin to see school as a place of learning, where they can take risks and learn from mistakes, instead of a place of compliance,” according to Nidya Baez, assistant principal at Fremont High School in Oakland.

In Oakland, high schools are gradually moving toward the new system. Parents, students, and teachers need time to understand what’s expected of them, and they must “buy in” to the change, according to Baez.

The districts see dropping Ds and Fs as a way to help students who have been most affected by the COVID-19 pandemic, especially black, Latino, and low-income students. But California’s K–12 schools already show some of the lowest performance in the nation. According to U.S. News and WalletHub, California schools rank, at best, 40th among the states.

To some teachers, the low grades signal that a student didn’t learn the material of a given class and needs extra help.

“Not reporting Ds and Fs is the equivalent of lying about a student’s progress,” said Debora Rinehart, a math and science teacher at St. Theresa School in Oakland. “I will work with any student before or after school or even on the weekend to help them learn. However, I will never lie about their knowledge level.”

Brenda Lebsak, a teacher and former board member of Orange Unified School District in Southern California, told NTD Television that some parents and students view lower standards as offensive—that it suggests that they aren’t “smart enough” to achieve higher grades.

“Not ever having a consequence … is just going to incentivize kids to do the least amount that’s expected,” she said.

In Santa Ana, Alma Tedraza, a mother of eight, said the change isn’t fair for the kids who work hard. During a meeting with some parents, teachers, and the superintendent at Segerstrom High School, she asked the superintendent how these policies are decided.

“He basically said, ultimately, he makes the decision,” Tedraza told The Epoch Times. “They are trying not to impact the emotional part of the student, but in the long run it’s going to impact their lives.”

She learned that the policy would apply not just in high schools, but to all grade levels.

“To my surprise, each student that spoke, they were really against this change. Some of the students were really upset,” Justiniani told The Epoch Times. “One student said, ‘I’m not an A student. For me, it’s hard, but I tried to do my best, and I don’t think this is fair.’

“Another student said ‘I am trying to go to college, and I’m working very, very hard. And what you’re doing is damaging our education. Because when the universities find out what is happening in this district, it’s going to damage our reputation.’”

Tedraza said the superintendent noted his intent for the change to be temporary and for it to become effective immediately. But Tedraza and Justiniani worry that if some parents support it, the policy will be prolonged.

“He said that 60 percent of the students were failing in Santa Ana. So they wanted to give the students a motivation to stay in school and not just drop school,” Justiniani said.

According to Tedraza and Justiniani, the superintendent said he based his decision on students’ data from quarantine, as many of them struggled to focus on distance learning while schools were shut during the pandemic.

Although education reform advocates have been pushing for grade elimination for years, some school districts appear to view the pandemic as an opportunity to put it into action.

“What does a grade mean? It’s a mix of things, and it’s different from teacher to teacher. It can actually be radically different,” said Alix Gallagher, director of strategic partnerships at Policy Analysis for California Education.

She said those who get Ds or Fs become discouraged or disengage even further, never learning the material that they initially missed.

“Instruction is what leads to learning. Not grading. They’re separate. That’s the problem—we have a disconnect between instruction, learning, and grading,” Gallagher said.

A Los Angeles Unified spokesperson informed The Epoch Times that teachers base grades on what students learn and whether or not they met the expectations of a given class.

“For example, rather than automatically giving an F to a struggling student, the teacher provides more opportunities to succeed on make-up tests, by redoing assignments, or extending deadlines. This new approach is teaching students that failure and trying again are part of learning and succeeding in school,” the spokesperson said.