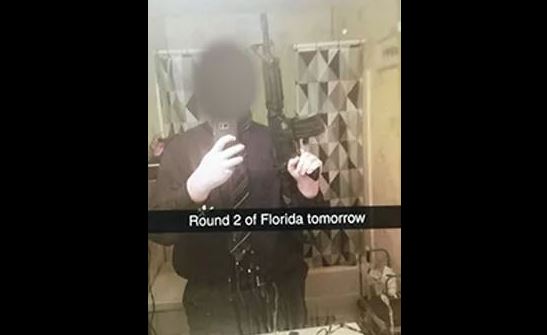 A threat posted to Snapchat by a Broome High School student. (Snapchat)
Crime and Incidents

A high school student in South Carolina was arrested on Thursday after making a threat of violence on social media.

The Broome High School Student made the threat on Snapchat.

The post on Snapchat showed a juvenile male wearing a mask and holding what appears to be an assault rifle, reported Fox.

The picture caption says “Round 2 of Florida tomorrow.”

The threat referenced the mass shooting on Feb. 14 that left 17 dead and at least 14 others wounded just north of Miami, Florida. Nikolas Cruz, 19, was identified as the shooter.

Authorities identified the student who posted on Snapchat early Thursday and rushed to his home where they arrested him.

“After informing the suspect and his parents of the law violation, the suspect stated his Snapchat post was just intended as a joke, and that he didn’t have any serious intentions,” Lt. Kevin Bobo told Fox.

The student’s parents allowed deputies to search the home. They found a mask and a weapon, which turned out to be an airsoft rifle, reported WYFF4.

The student did not have access to any real weapons.

The student was arrested and charged with disturbing the school.

He was taken to the Department of Juvenile Justice facility in Greenville, deputies said.

The student has not been named but is a freshman at Broome, reported WSPA.

Officials commended the student who alerted authorities of the threat.

“The District would like to commend the student who came forward with information. It is this kind of courage to speak out that can and will prevent tragedies,” District 3 Superintendent Kenny Blackwood said in a statement.