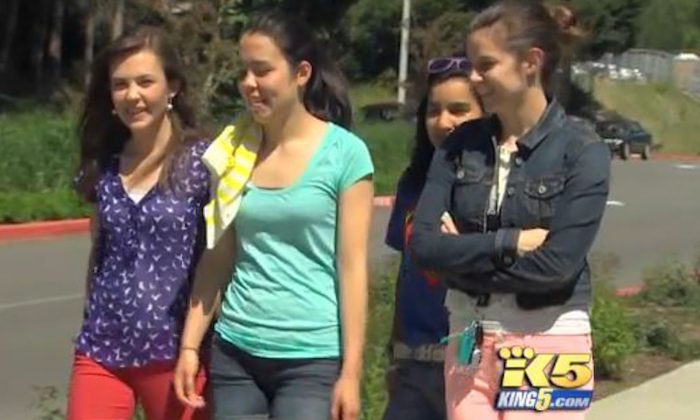 Students at Issaquah Senior High School in Washington on May 6, 2013. An unofficial contest held by students at the school known as May Madness, has boys vote on which girls are most attractive. (Screenshot/King 5 News)
US

High school “hotness tournament”: An annual tradition at a Washington high school pits girls against each other in a contest to see who’s most attractive.

Last year, when students at Issaquah High School created a website to host a contest for the title of May Madness champion—the prettiest girl at school—police shut it down by threatening to arrest the site administrators.

Some students had made disparaging remarks under the photos, according to local broadcaster King 5 News, which is considered a crime in Washington.

This year, however, the students have kept the identities of the people running the contest under wraps.

A Sept. 9, 2012, post on the May Madness Facebook page states: “Senior guys at Issaquah High School: May Madness officially starts in less than 8 months. One of you needs to step up and take over the tradition with a committee. Text me or message me if you want to take on one of the biggest responsibilities at Issaquah.”

School district spokeswoman Sarah Niegowski told K5 News that, despite parent outrage, there is little officials can do. “They’re very quiet about who it is and the group behind it,” she said.

The Facebook page shows a montage of the faces of girls selected as contestants, posted May 1. Only a couple of comments had been made on the post.

Sam Bakony, whose profile photo shows a young girl with long, blonde hair, commented: “Umm why am I not on here I’m deeply hurt.”

“This kind of thing is sexualizing us girls like we’re some sort of trophy,” Devon Keller, a student at the school, told K5.

In 2011, a girl at the school turned the contest around with a Facebook page also titled May Madness showing the male students.