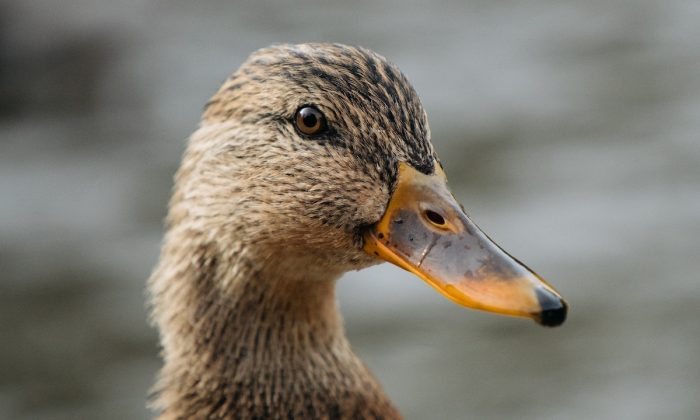 Stock photo of a duck. (Björn Antonissen/Unsplash)
Crime and Incidents

Several football players at a New Hampshire high school have been suspended for up to several games after a video surfaced on social media showing a duck being beaten with a broomstick, according to reports.

Three to six students at Kennett High School in Conway are to be suspended for up to five games, as part of their punishment for attacking the animal while at football camp last month, the Conway Daily Sun reported.

According to the report, an incident involving the killing of a duck came to light when a video was posted on the internet that showed a group of boys leading the duck out of the water at Lake Winnipesaukee’s Moultonborough Bay. The duck was then beaten with a broomstick and later strangled to death.

The report said the incident occurred when the boys were at a high school football camp held at Camp Winaukee in Moultonborough on Aug. 20-22.

Local station WNUR published some still photos from the video that showed the duck being abused.

School Superintendent Kevin Richard said that the students are meeting with punishment in the form of community service, game suspensions and more, the outlet reported.

Many people have called the school to express their outrage over the incident, according to the ABC-affiliate.

“You have strong opinions both ways and you try to come back to what you think is reasonable, and also recognizing these are adolescents that make bad choices,” Richard told the station. “This was a grievous mistake.”

New Hampshire Fish and Game Department did not charge the high school students, as per a decision made by Conservation Officer Sgt. Alex Lopashanski, according to the Conway Daily Sun.

Kevin Jordan, who oversees the law enforcement division at the Fish and Game Department, said he believes the school “took some appropriate steps right away.”

He also told the paper that after the duck was attacked by a group, another student attempted to put the abused animal out of its misery.

“The duck was injured from the beating it received, and this young man felt the only way was to stop that suffering was to put the duck down,” Jordan told the paper, saying the student felt he had no other choice but to strangle and kill it.

Melissa Wood, a community member, wrote to the paper’s editor and expressed her disapproval of the state Fish and Game Department’s decision not to pursue charges against the boys. She said their punishment equates to “getting a tap on the wrist, not even a slap. They are not being held responsible at all.”

“I would be mortified, embarrassed, and very concerned about the mental health of the boys involved if I were their parents. These acts of abuse inflicted on innocent animals can be a precursor to more violent acts toward human beings,” she wrote.

“To not give these boys more of a punishment for beating a duck with a broomstick and later strangling it to death … what is wrong here?” she added. “It’s how it starts, and with no real punishment, it’s only a matter of time before they move on from animals to humans. Way to set standards in our community.”

The effects of animal cruelty reach beyond the animal victims, as noted by researchers for the Animal Welfare Institute in a 2012 report (pdf).

Nearly every state has passed laws making animal cruelty a felony in some or all cases, the researchers said, which is “a dramatic change” in how the crimes are viewed and prosecuted.

New Hampshire specifies its animal cruelty law in its section 644:8, where it states that if a person “negligently beats, cruelly whips, tortures, mutilates, or in any other manner mistreats or causes to be mistreated any animal,” they are guilty of a misdemeanor for a first offense, and of a class B felony for a second or subsequent offense.

However, if the person is found to have committed the above purposely—i.e. not negligently—they are guilty of a class B felony right away.