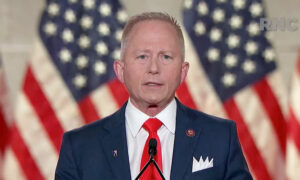 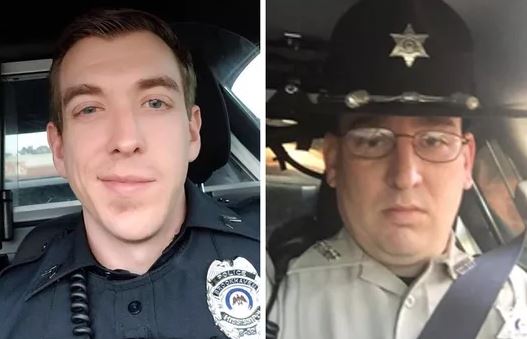 Zach Moak, left, and James White, Brookhaven police officers, were shot to death on Sept. 29, 2018. A high school band's performance including a depiction of holding officers hostage came just one day after Moak's funeral, on Oct. 5, 2018. (Mississippi Department of Public Safety)
US News

A high school band director in Mississippi has been suspended from his duties after members of the band during a performance portrayed doctors and nurses holding police officers at gunpoint during a halftime show on Friday, Oct. 5.

The shocking depiction came during a performance by the Forest Hills High School marching band during a halftime show at a football game in Brookhaven, about 60 miles south of Jackson.

During the performance, two students wielded fake guns and pretended to hold hostage other students who were dressed up as police officers, according to accounts from eyewitnesses and photographs taken and shared on social media.

Officials quickly reacted to the news, with Mississippi Gov. Phil Bryant taking to Twitter to condemn it.

“This is unacceptable in a civilized society. Someone should be held accountable,” he wrote.

This is unacceptable in a civilized society. Someone should be held accountable. https://t.co/hq3hJnj4xA

Brookhaven Mayor Joe Cox said in a statement that he spoke with Jackson Mayor Chokwe Antar Lumumba, who informed him that the director of the band had been placed on administrative leave pending an investigation as of Oct. 6, reported WLBT. The name of the director has not been made public.

Jackson Public Schools Superintendent Errick Greene apologized for the depiction in a statement.

“On behalf of the Jackson Public School (JPS) District, I want to offer my deep and sincere apologies for the performance by the Forest Hill High School band during Friday’s football half-time show in Brookhaven. Based loosely on the movie, ‘John Q,’ the band’s performance depicted a hostage scene that included toy guns,” he said.

“JPS has a great deal of respect and appreciation for our law enforcement partners. The band’s performance does not depict the values and people in our community and was incredibly insensitive to the students, families, law enforcement officials, and the entire Brookhaven community. For this, we sincerely apologize to all, and we pledge to do better in the future.”

James White, 35, and Zach Moak, 31, were killed while responding to a report of shots fired on Sept. 29.

After White was shot, Moak engaged the suspect and attempted to save his fellow officer.

“He entered the valley of the shadow of death and he feared no evil because God was with him. He engaged the suspect, and even when he was mortally wounded, he didn’t think of himself,” said Brookhaven Police Chief Kenny Collins at Moak’s funeral on the morning of Oct. 4, just one day prior to the football game, reported the Mississippi Clarion-Ledger.

“He went toward Officer James White and he was pulling him out of the line of fire to safety.”