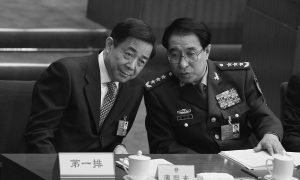 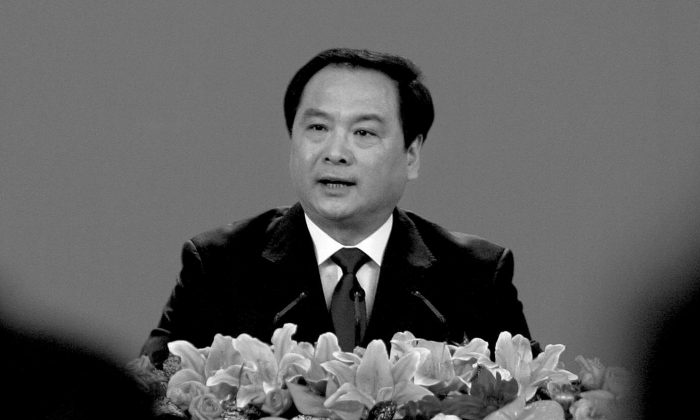 Li Dongsheng in the Great Hall of the People in Beijing on Oct. 14, 2007. (Frederic J. Brown/AFP/Getty Images)
China

A single sentence posted on Dec. 20 to a Chinese regime website announced the investigation of a high-ranking official who has helped carry out the persecution of the spiritual practice of Falun Gong for the past 14 years. With this announcement, the Party for the first time acknowledged the existence of the secretive Party organization that has directed this persecution.

The announcement on the website of the Central Commission for Discipline Inspection of the Chinese Communist Party listed Li Dongsheng as holding the offices of deputy director of the Leadership Team that handles Falun Gong, director of the 610 Office, and deputy party secretary and deputy minister of the Public Security Department, although the announcement used the formal titles for these offices, which do not mention the words “Falun Gong” or the commonly used name “610 Office.”

The Leadership Team and 610 Office are extrajudicial organizations and are operated secretly, according to a report on Li Dongsheng by the New York-based World Organization for Investigation of the Persecution of Falun Gong (WOIPFG).

Mr. Xia Yiyang, the director of investigations for WOIPFG, said, “No formal, official organization and website in China has ever publicly acknowledged the existence of the agency [the Leadership Team], although some other media and websites mention the agency on occasion.”

The announcement not only acknowledged the existence of the Leadership Team but, by listing it first, focused attention on it, Xia pointed out.

“Since Li Dongsheng’s career in the past 14 years is mainly related to this secret organization, it [the investigation announcement] unveils the persecution [of Falun Gong] that has lasted 14 years,” Xia said.

The Leadership Team was established in June 1999 by then-leader of the CCP Jiang Zemin.

The 610 Office, established on June 10, 1999, was formed specifically for handling the day-to-day operations of the Leadership Team in persecuting Falun Gong, the WOIPFG report says.

“The Leadership Team is not a legal organization. It’s an organization of the Party, and the persecution is a political movement raised by the Party,” Xia said.

Before setting up the Leadership Team and the 610 Office, Jiang set forth his reasons for persecuting Falun Gong (also known as Falun Dafa), in a letter he circulated to the Politburo on the night of April 25, 1999.

Jiang emphasized how many people were practicing Falun Gong—at that time official state figures showed 70 million had taken up the practice, more than the Communist Party. Practitioners say more than 100 million, or 1 in 12 Chinese, were practicing.

Jiang feared that a group not under the control of the CCP had grown so popular, and he feared the moral teachings of Falun Gong might prove more attractive to the Chinese people than the CCP’s atheistic ideology.

Li Dongsheng was there to help carry out Jiang’s campaign from the very beginning.

The CCTV program “Focus” that Li was in charge of produced 102 episodes of anti-Falun Gong programs from 1999 to 2005, with 70 of the episodes produced during the 5 months’ time from July to December 1999, the WOIPFG report says.

One of the videos aired on the CCTV claimed to show five Falun Gong practitioners self-immolating on Tiananmen Square in January of 2001. CCTV began playing the video almost immediately night and day, and it profoundly affected how the Chinese people viewed Falun Gong, causing large numbers for a time to support the Party’s campaign against the practice.

After media outside China had a chance to analyze the video, it was deemed a fraud. The award-winning documentary “False Fire” went through the video frame by frame showing problems with it and also cited criticisms of it published in the Washington Post, National Review, and other media outlets.

In 2009, Li was promoted to be the director of 610 Office and also became the deputy party secretary and deputy minister in the Public Security Department. In these positions, Li took responsibility for driving forward the persecution of Falun Gong.

In 2010, the CCP announced a three-year campaign to brainwash all Falun Gong practitioners in China, which was followed by a sequel, the “Final Battle” campaign, which runs from 2013-2015.

According to the Falun Dafa Information Center, during the persecution at any one time hundreds of thousands of Falun Gong practitioners have been detained, suffering brainwashing, torture, and abuse.

The Center has confirmed that 3,731 practitioners have died from torture and abuse, although the actual number is believed to be far higher. In addition, tens of thousands of practitioners are believed to have been murdered through having their organs harvested for use in transplantation.

The announcement on Dec. 20 is by any account big news. Li is the second Central Committee member, along with oil industry head Jiang Jiemin, to be investigated since the 18th Party Congress in November 2012.

Like Jiang Jiemin, Li is closely tied to the former domestic security czar Zhou Yongkang, who is also now under investigation, and to the faction of former party head Jiang Zemin.

The short announcement stated that Li Dongsheng was being investigated for “serious violations of law,” but didn’t give any hint as to what those violations might be.

“Putting Li Dongsheng’s identity as deputy head of the Leadership Team and director of the [610] Office in front of other titles intimates that his serious violation of discipline is directly related to this identity,” according to the investigator Yiyang Xia.

The announcement may also be delivering a broader message.

“The current leadership might have second thoughts about the persecution of Falun Gong. At least it doesn’t want to take the responsibility for the crimes that the Jiang Zemin regime has committed,” Xia said.

Xia said that the people involved in the persecution are tired after 14 years, and it’s not easy to find individuals willing to continue the persecution actively like the former CCP officials who started it, such as Luo Gan, Zhou Yongkang, Bo Xilai, Liu Jing, and Li Dongsheng.

“The persecution of Falun Gong needs individuals who are ruthless and active. But it’s not easy to find people like that even in the evil [CCP] system” Xia said. “Without anyone to take over the persecution, it’s very difficult to keep the persecution as it was.”