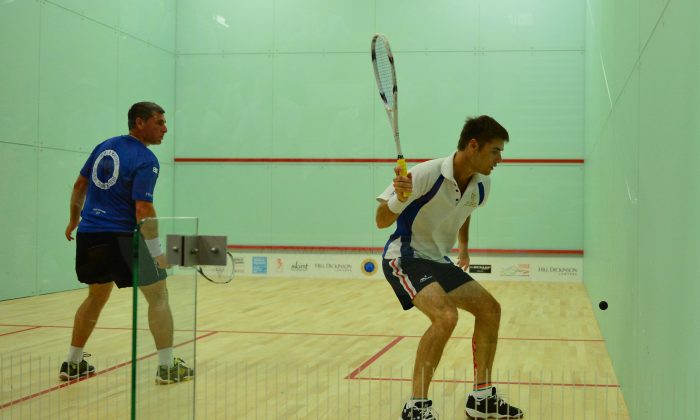 Glen Hitch of Australia on his way to winning his 3rd round match against Daniel Bandiera of France in the 40+ Division of the World Squash Masters Championship, at the Hong Kong Football Club on Monday July 7, 2014. (Bill Cox/Epoch Times)
Hong Kong

HONG KONG—Of the 750 plus players in the World Masters Squash Championship currently being played in Hong Kong 62 are competitors that live and play regularly in Hong Kong. The competition has 10 age categories for men and eight for women ranging from 35 years to over 80 years (70 for women).

The “Hong Kong” women’s contingent totalled just four participants, three of whom progressed a little through the tournament, but none were able to push beyond the 3rd round.

A total of 58 “Hong Kong” men entered the competition, but most fell at the first or second fence. Only a few progressed past this stage. Chad Sunde, Phil Head, Keith Frith, James Barrington, Hugh Dyas, Phil Neilson, Dennis Lee and Bob Wasyliw reached the 3rd round.

Chad Sunde was unlucky to come up against No.1 seed Craig Rowland causing his demise in R-3 in the 40+ Group and Phil Neilson also lost in the 3rd round to the No.1 seed, Geoffrey Davenport of Australia in the 55+ Group.

Australian Glenn Hitch seeded-3 (who could be considered at least part Hong Kong), was through to meet un-seeded Lubos Walter of South Africa for a place in the Quarter Finals in the 40+ Group and Malcolm Kerr had progressed to R-4 in the 45+ Group. Ex Champion at 40+ in Finland in 2003, Peter Hill, easily eased into R-4 of the 50+ Group.

Hong Kong can be considered a “squash” territory with many players playing the sport and one would have thought that the better players in each age group would compete well in this Championship. Certainly “Hong Kong” players are no slouches, but it has been shown that only the really top few can progress in this World Class tournament.

The level squash has been high with many hard fought wins. However, although played seriously and with full intent to win it is pleasing to see that all matches have been played and supported in a truly excellent spirit.

The whole 1000 people involved (including organisers, markers, supporters) have generated a friendly, and at times a jovial atmosphere showing that people of different nationalities can interface quite happily with one another.

On a more general front Hong Kong is used to running major international sporting events successfully and the organisation of this event has again been accomplished to a high professional level. To plan and arrange matches for so many people and to provide accurate, timely information, not just for the main competitions but also for Plate competitions is highly complex and to do this successfully is no mean feat.

There have been many comments by players and supporters praising the quality of the facilities provided. They have expressed appreciation of high level of general and squash facilities provided at both the Hong Kong Football Club and the Squash Centre. The ability to accommodate so many matches at just two venues, and for those to be within easy commute, is highly unusual. This tournament has further raised peoples’ impression of Hong Kong.

The competition is still ongoing and finishes tomorrow Friday July 11.