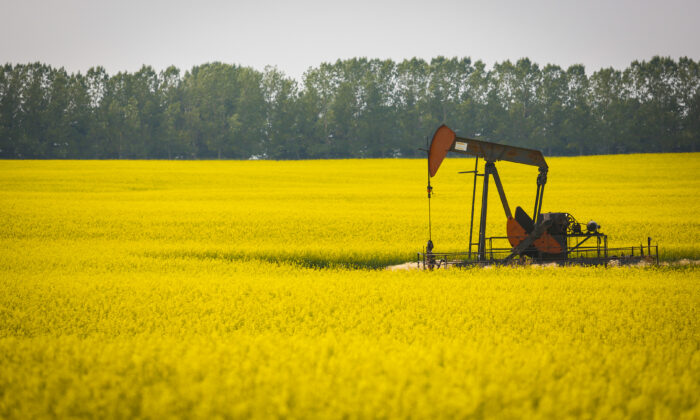 A pumpjack draws oil from underneath a canola field in Cremona, Alta., on July 16, 2021. (The Canadian Press/Jeff McIntosh)
Canada

The highest oil prices in seven years will encourage drilling, investment, and employment in Canada’s energy sector, but not as much as in past years, say analysts.

The West Texas Intermediate (WTI) oil price exceeded US$79.10 per barrel on Oct. 5,  and some analysts expect prices to rise higher still. The last time the price was this high was 2014, a year that 11,222 oil and gas wells were drilled in Canada, according to the ARC Energy Institute. Yet ARC expects just 4,247 wells to be drilled this year.

Richard Masson, an executive fellow at the School of Public Policy at the University of Calgary, said hesitancy owes to a few factors.

“Everybody was scared silly last year when prices really collapsed, and so they’re not anxious to make commitments until they know prices are going to be firm for a while and we can count on them,” Masson said in an interview.

The average WTI oil price in 2020 was US$39.16 a barrel, the lowest price since 2003, even in nominal dollars. From 2011 through 2016, the sector reinvested more money back into drilling and oilsands development than its after-tax revenues. This year ARC expects it to reinvest just 37 percent of a record $77.6 billion in after-tax cash flow.

“Wall Street and Bay Street are both very much of the opinion that companies shouldn’t start spending a lot of money on production. They should instead return this excess money to investors. And that’s happening a lot right now,” said Masson.

“There’s not a lot of point in drilling for new oil if you can’t get your oil to market effectively. And until Oct. 1, when Line 3 started up, there hadn’t been new pipeline capacity for a long time.”

Line 3, operating since 1968, sends oil from Hardisty, Alberta, to Superior, Wisconsin. Enbridge began replacing the entire line in 2017 and can now send 760,000 barrels of crude a day, an increase of 370,000 from the former line.

“[What] the delay of pipeline infrastructure ultimately did was contribute to greater price volatility in Western Canada than it would have otherwise been,” Birn told The Epoch Times.

“[Oil companies] see multiple scenarios saying [oil production] has to peak, it has to come down for net zero to be achieved, which is what a lot of the countries want now. … So they’re increasingly discounting the future potential of these companies, which, again, whittles down their interest in investing.”

Birn added that while drilling is currently higher than it was, it’s “not consistent with historical norms.”

As foreign companies have divested in the oilsands, it has become increasingly Canadian-owned. In March this year, Calgary-based Cenovus Energy Inc. bought Husky Energy Inc. It’s one reason Calgary has the highest vacancy of office space in Canada, at 30 percent—almost double the Canadian average and more than Edmonton’s 21 percent.

“Where you had two companies, you have one, and they don’t need the same level of governance and accounting and oversight,” Birn said.

Birn says the Western Canadian energy sector can focus on optimizing its operations and profits now and enjoy the capacity it has built up.

“The challenge of the oilsands is building this stuff, and that’s we what went through, this build cycle. But now what we’re sitting on is a very large installed asset base that can run a long time, being very competitive with other sources of supply globally,” he said.

“Higher oil prices have very positive implications,” he adds, “and certainly it paints a picture of a significant revenue boost to the province of Alberta.”

Birn believes employment and investment will improve, though not as much as when prices were last this high.

“Companies are going to start to hire again because there is so much money to be made,” he said.

“The world needs more oil. We can see that because the [WTI] prices are almost 80 bucks. So it’s going to come, but it’s not probably going to come like a big wave, like a big boom.”