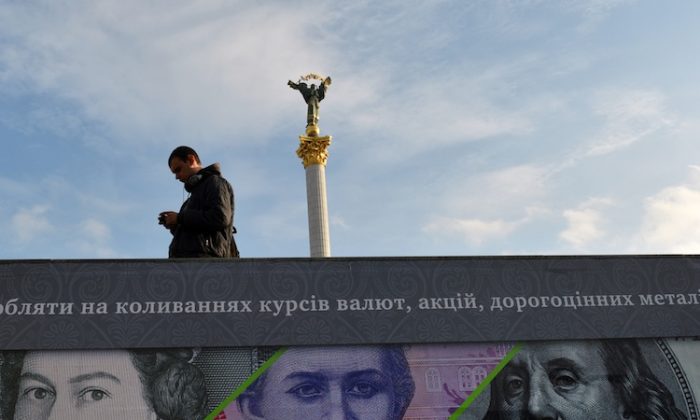 A man stands next to an advertising placard showing British pounds, US dollars, and Ukrainian hryvnia banknotes on a warm autumn day in the Kyiv, Ukraine, on Nov. 12, 2012. (Sergei Supinsky/AFP/Getty Images)
Europe

KYIV, Ukraine—Small and medium businesses are a mainstay of the European Union economy, comprising two-thirds of all employment and contributing 50–60 percent of GDP. However in Eastern Europe’s Ukraine, aspiring businesspeople face obstacles to contributing to the local economy.

Most people dream about becoming successful—to have a prestigious car, a chic house, and a worldly lifestyle. However, with Ukrainians’ average wages at only $US381 per month, often the only way to have these luxuries is to start one’s own business. Some may have access to a sizeable inheritance or may manage to get initial capital by attracting investors.

For the less fortunate, the only option for starting a business is to secure a bank loan. Nonetheless, in Ukraine it is difficult to find good credit conditions that will allow businesspeople to pay the principal and interest on a loan, while at the same time providing sufficient income.

Oksana Prodan, head of the All-Ukrainian Association of Small- and Medium-sized Business, or Fortress, says that interest rates for small business loans are unrealistic.

“Crediting [interest] rates are too high—nearly 24 percent—and if a bank shows a lower rate, then you’ll get supplementary costs [that will add up to] a similar sum. But such incomes are not a reality for small businesses,” said Prodan, in a comment for The Epoch Times via email. While the interest rate for loans in Ukrainian hryvnia [currency] is nearly 24 percent on average, the rate for loans in US dollars is only around 12 percent.

In order to be eligible for a loan, businesses need to demonstrate financial security, with a capital requirement of 1.5–2 times higher than the cost of the loan. Borrowers also need to show their financial records from previous years, which small businesses tend not to have, says Prodan.

Experts like Prodan point out that interest rates are only 4–9 percent in countries that stimulate their local economy and in those countries state programs often work to lower those rates.

“If we want to develop business in our country, crediting rates shouldn’t surpass the average profitability of production. Otherwise, the production will be accompanied by constantly rising prices,” said Prodan.

Valentin Ozerov, a business management consultant, says that in most cases only micro or large businesses can get loans, as only they can compensate for such “mad” interest rates.

“Think about it, if banks ask for a 26 percent rate from people [in local currency], businesses won’t be charged less than 40 percent. For small and medium businesses it’s not common to be able to pay off such expensive loans,” Ozerov told The Epoch Times by email.

Experts suggest that borrowers should see taking out a loan as an extreme measure and try to avoid it, if possible. “If your profit doesn’t allow you to reinvest and to grow naturally with the market, then there’s something wrong with your business,” said Ozerov.

Even if it’s not possible to get a loan or take money from investors, there are alternatives available for those wanting to start a business.

“I guess, lack of initial capital is a favorite excuse for those who want too much, immediately and at this moment,” said Gennadiy Kholodkov, director of production-technical association Azot, in a comment on the popular Ukrainian website for entrepreneurs, prostobiz.ua.

He proposes to start out by organizing a low-cost operation, and even better, one without any investment.

“Take as example developers of software and websites, private practitioners, auditors, notaries, business consultants—they all make money with their knowledge. For example, my friend from university several years ago created an online-game. Today his fortune is more than $US6 million,” said Kholodkov.