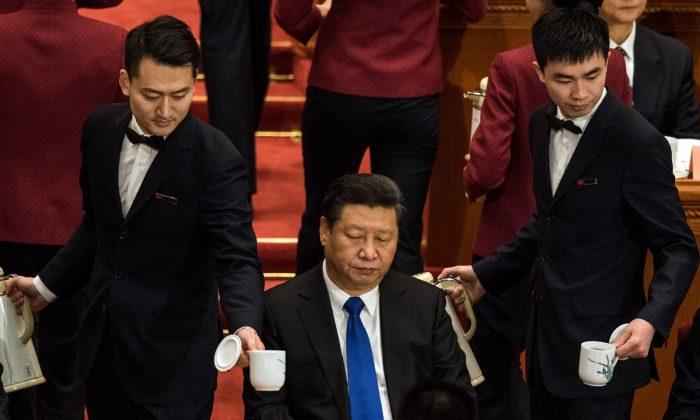 Chinese President Xi Jinping (C) attends the opening session of the Fourth Session of the 12th National Committee of the Chinese People's Political Consultative Conference (CPPCC) at the Great Hall of the People in Beijing on March 3, 2016.(JOHANNES EISELE/AFP/Getty Images)
China

A typical sight in file photos taken at national-level Communist Party conferences in Beijing are the attractive red-clad female attendants who serve officials tea and other amenities during the functions. But this year, a number of lean, well-dressed men have been added to the mix, and netizens suspect that it’s more than just an innocent gesture for gender equality.

Poking fun at the stares of pictured officials, notably among them the former Party boss Jiang Zemin, Internet users theorize that this year’s inclusion of male attendants is an added touch to keep the nation’s leaders on task and thinking with their heads.

In the interest of keeping our leaders undistracted, this year’s lianghui will employ male attendants.

This year’s “lianghui”—Chinese political jargon for two annual meetings held by the country’s top leadership bodies—has been in session since March 3.

One satirical post on Sina Weibo, a Chinese social media platform, reads: “In the interest of keeping our leaders undistracted, this year’s lianghui will employ male attendants.”

A final photo in the collection shows current Communist Party head, Xi Jinping, looking ahead as two men pour tea behind him.

A user-provided caption reads: “No room for infatuation in my life.”

Other comments opined that the male attendants would decrease the exposure of “public buffoonery” by Chinese officials.

The selection process for attendants at important Communist Party functions incorporates high standards. Applicants are filtered by their education, police records, provincial or municipal testing, and an interview at the Jingxi Hotel, a popular informal meeting location for Party leaders in Beijing.

Vista Kantianxia, a Chinese magazine, reported that according to a former manager at Jingxi, appearance, height, and skin quality are the crucial factors in accepting potential hostesses for interview.