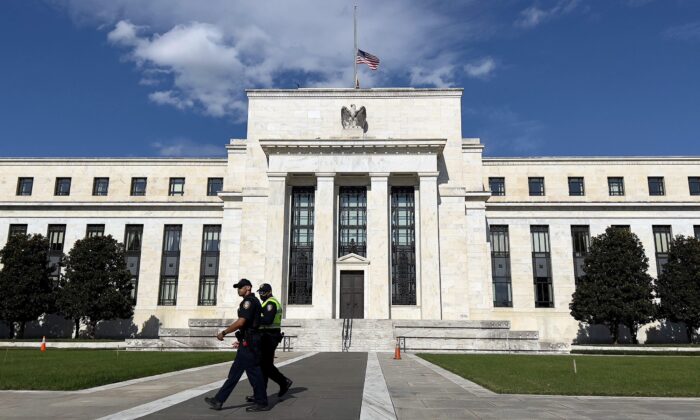 Goldman Sachs strategists predicted in a Nov. 25 note that hotter-than-expected inflation will push the Federal Reserve to accelerate the pace of phasing out its massive bond-buying program in a bid to ease price pressures.

At their most recent policy meeting in early November, Fed officials said they would start dialing back the central bank’s monthly purchases of Treasury and mortgage-backed securities by $15 billion per month, which would bring them down to zero over eight months, with the so-called “taper” concluding in June. At the same time, Fed policymakers left the door open to a faster taper in the event of signs that higher inflation were to become a more permanent fixture of American life.

Newly released minutes from the Fed’s Nov. 2–3 meeting show policymakers worried about the persistence of price pressures, softening their tone on the “transitory” inflation narrative, and acknowledging the growing risk that future inflation expectations could become de-anchored, potentially leading to changes in spending patterns and driving up wage demands.

While Fed officials judged that the elevated price pressure was mostly driven by production bottlenecks and other factors that they expect to be temporary in nature, they agreed that they should make the case for “transitory” inflation less forcefully, while vowing to pull monetary policy levers to try and tame higher prices if inflationary pressures become more entrenched.

Following the release of the minutes, Goldman Sachs now predicts that the persistence of inflationary pressures will force the Fed to double the pace of the taper to $30 billion per month starting in January, which would bring the timeline forward to mid-March.

“The increased openness to accelerating the taper pace likely reflects both somewhat higher-than-expected inflation over the last two months and greater comfort among Fed officials that a faster pace would not shock financial markets,” Goldman Sachs analysts said in a client note.

Despite the accelerated tapering schedule, Goldman expects the Fed to start raising interest rates only from June for a total of three times in 2022. The investment bank is one of a handful of major financial institutions to have recently raised their interest rate hike expectations for next year from two to three.

It comes as a number of economists, including several Obama-era advisers, have taken aim at the Biden administration and the Fed over the inflationary surge.

Steven Rattner, head of the Auto Industry Task Force under former President Barack Obama, recently became the latest Obama-era economic aide to sound the alarm on inflation, asking in an op-ed how the Biden administration could have gotten “this critical issue so wrong” and warning his Build Back Better agenda could exacerbate inflationary pressures.

Prior to that, former Treasury Secretary Larry Summers, who was early to sound the alarm on the current bout of surging prices, told CNN in an interview that he believes the labor market is tight and monetary policy too loose.

Summers called for a faster taper of the bond-buying program, urging for it to be phased out over three months, not eight, as the Fed’s current $15 billion per month wind down schedule implies, or five, as Goldman predicts.

Inflation has become a key issue amid the post-pandemic economic recovery, rising faster than wages and eroding the purchasing power of Americans. It has also become a pain point for the Biden administration, which recently moved to release 50 million barrels of crude oil from the national strategic stockpile in a bid to cool high gasoline prices.